Before You, (Choc Lit), Kathryn Freeman 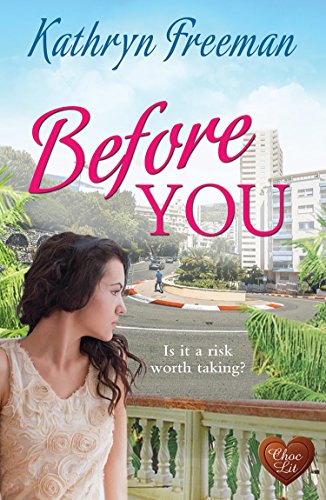 I’ve read and enjoyed several books from Choc Lit now, it seems what they publish almost always suits what I want to read – that makes choosing so much easier 🙂 This one proved a hit too.

Mel was a great lead – I really liked her. She’d been through a lot with her parents both dying when she was just 18, she’d not got any other family, but instead of curling up and giving in she pulled herself through and has been working as PR rep for Delta. After dating a top racing driver and finding he was a jerk, catching him cheating on her, she’s vowed to stay well away from any in future. Her heart won’t stand the stress.

Then she meets Aiden when he comes to Delta and – well, he’s all she’s come to expect from racing drivers but still she can’t help being attracted.

Aiden is used to just instant gratification – the ladies throw themselves at him, he doesn’t have to do anything, but when he meets Mel somehow she’s different. She makes it clear she’s not interested, that he’s just a manwhore, typical of the racing set, and it makes him  look at himself. He doesn’t like the image Mel has of him, and he’s intrigued by her more and more as they have contact through work. Of course sooner or later things go bang and when they get together its sensational. He wants more but Mel announces it was a mistake and she just wants to be friends. She’s got to him now though and he tries hard to show her he’s changed.

Of course he has issues too, living up to his world famous racing driver father, and now he’s racing for the same team the hype and questions are endless. The view the media and public have of their relationship though isn’t the real one. He died when Aiden was very young and his treatment and basic neglect of Aiden left him feeling angry at him, but he works hard at keeping his true feelings hidden while relating the usual spiel about their relationship. It’s all pressure in a year he doesn’t need it and then…well, something further happens that adds to that pressure, that causes problems but also bring him and Mel closer. Can he break through and persuade her that they can be together, can he still win the championship or will it all collapse.

Overall its a fun romance, enough drama and plots to kkeep me reading and intersted roght to the end. Felt very real, I know nothing about racing but was “there” with them, and enjoyed that Aiden wasn’t automatically the winner in each race, that things went wrong, he made mistakes, that Mel struggled with her feelings for him fighting the conflict of her vow to keep away from racing drivers, especially those who play the field so openly as he does. I like to feel there’s a chance they won’t make it togheher even though I know they will come through 😉