Wanting It All, A Naked Men Novel, Christi Barth

Wanting It All, A Naked Men Novel, Christi Barth 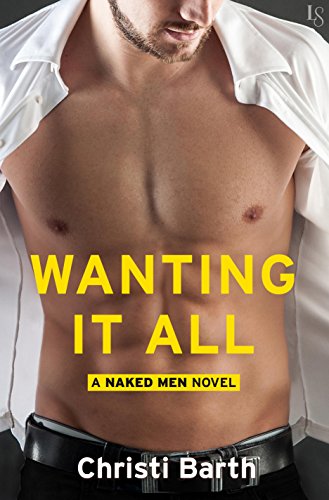 I hadn’t read the first book but that didn’t matter -this is a series of connected books, each a stand alone so that didn’t matter. I love those, it feels like meeting old friends and its great when you see how leads from earlier books are getting along together.

I liked the sound of the story and eagerly dived in. I was in the mood for a straightforward, uncomplicated romance and in a way that’s what I got.

I found it hard in some ways to accept the “naked men” part – yes, they’d been friends since the accident, and stayed true to each other but in to many ways they were like overgrown schoolboys still.  I found Knox views on women as a bit misogynist. He outwardly valued them but his “no second helpings” stance, and the way he was so proud of himself for getting any woman he wanted was a bit jarring. Then he meets Madison.

I wanted to like her – I did like her, but her search for a husband really got old after a while, her insistence on not deviating from her Plan was irritating. She was as bad as Knox in some ways, he didn’t want repeat dates and treated ladies as disposable, she sees every man as potential husband, rather than looking at them as individuals.

The story was fun, the group of lads were great in how they supported each other, but at times Knox was too obknoxious for me ;-), shallow, uncaring – then he’d do something that came from the heart, and I saw a glimpse of the man the others loved and respected. Madison’s Plan, her intransigent view of not deviating from it at all, and her trying to make Knox fit into the image she visualised of the man she wanted seemed a recipe for disaster. You can’t change a person, love them for who they are not try to mould them into someone else.

I could see with both of them how the influences from each other mellowed their ideas and ways a lot, but I still wondered…were they really right for each other? I need to feel that leads are a match made in heaven so to speak, that they simply Must be together, and I didn’t get that with Knox and Madison.

Loved meeting the other characters too, and the idea of the podcasts, but though it was a fun read it made for an entertaining story,  it wasn’t a can’t-put-down read for me. I’m hovering between a three/good read and a four/very good. All the elements were there for a four, the storyline was fun, and the lost/found brother intriguing, but somehow it all felt a little surface based, not much depth to it and thus not much real angsty drama and I do need that.

Stars: three, good storylines, but the magic wasn’t there for me.