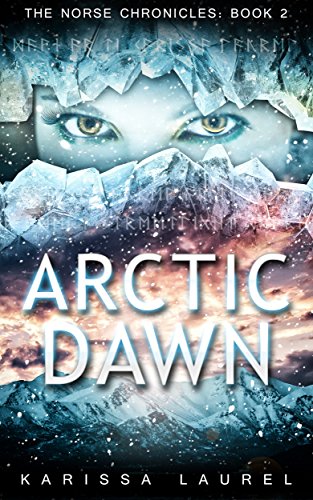 For those who don’t like those fantasy reads that are all romance all the way – this isn’t. Its now book two and only by the end do we actually get a hint of romance that’s maybe developing…maybe 😉 So don’t let the romance genre put you off. I like both sorts but know others don’t.

So, Solina finished the last book with a bang – literally – and has spent the last month as a shooting star. What??! Yep, read book one first, this isn’t one you can start with, you have to read all the story.
Its a fabulous take on Norse mythology and its fun to work out who is or isn’t some kind of God, or at least has special powers. You need to be really “in” to the story and to have read the first book, otherwise nothing will make sense, and that’s a shame as its a fabulous, real Fantasy read.
I love the way the Norse legends have been woven in, and the way Karissa manages to give an overview of the relevant ones for readers who might not know or remember the stories.

I loved the way Solina and the Apple Orchard stuff was woven into her dreams and slipped into reality. I’m a sucker for that sort of crossover, though I do wonder – I know they’re in a very uninhabited place in the world but surely news reports, monitors, all the eyes on the world, cyber spying stuff must have picked up some of their battles. Its not like its a small event when Gods battle after all. Huge fires, cracks that are massive craters in the earth, the noise and firework effects – they must attract some kind of attention.

What I didn’t like was that it seemed a bit like running, always running, from someone to somewhere but not actually getting anywhere.
Baldur, the Allfather frankly seemed a bit of a lovelorn wimp, but maybe his time with Helen had affected him and I’m just unsympathetic. I didn’t really see why they were trailing with him after Nina, well Thorin anyway, given the magnitude of what they faced, even though there is an explanation. I guess it just didn’t sit right with me.
Then again – Immortals – they’ve a different take to time and importance, but this danger affects them too.
I’d guessed someone who wasn’t what they seemed from book one, it was nice to be proved right, * huffs proudly * so often I’m, waaay off track.
I have the feeling Nina is going to be more important in the next book, there must be some point to all that time rescuing her in this one.
I want to read how the Valkyries rally, and I’m glad to see them stand up for themselves, might have been fine in history toadying and waiting around for the males to need them, its different times now and Feminism has found them!

Once more is a gripping story, so very different to most fantasy reads about today and so very refreshing to read something so totally unique. Roll on book three 🙂

Stars: five, a fantasy read in the real sense!