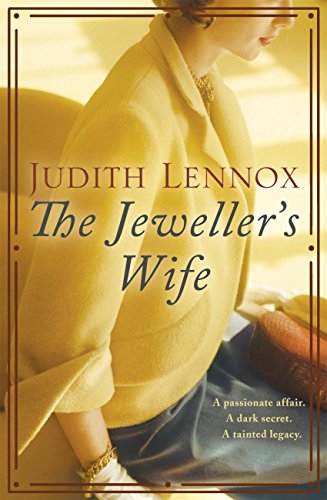 My first Judith Lennox read, so I wasn’t sure what style she’d have, if I’d like it and for a while I feared it would be one I didn’t.
It seemed very slow to start, I was hooked by the decisive way Henry swept Juliet into his sphere, out of Cairo and into Marsh Court, but once they were there though and we met the rest of the Winterton family and Henry’s friend Gillis, it seemed to become a bit bogged down for me.
I felt that it was a bit full of yet more people who seemed to not add much to the story, just to be there as family members.

Gradually though I was drawn in, the little cracks in what seemed like perfection bled through, the people became more real to me as they took on more solid form and revealed their personalities.
I really didn’t like Henry, admired him when he first met Juliet, but once back in England I saw what a cold, bullying man he was. Yet he had good friends, was greatly admired by people, had a sound reputation and seemed to almost be two different people at times. I so felt for Juliet left in the cold and austere Marsh Court during the war, struggling to keep things going, working so hard as most women did to hold home and family together. When Henry returned as in many families it was to a change, from the home they’d left, to children grown from babies, to wives that had become more independent thinking.
You can see how he slowly draws away from Juliet, and it made me wonder just why he ever married her. Did she fill a need for a wife? Was he that entranced with her? If so why did the gloss wear off, or would he have been that sort of man anyway?
I felt for poor little Piers too, always striving for his father’s approval and never quite getting it.
I love the closeness of the cousins, the family days they all had at Marsh Court, and then Gillis comes into the scene just when Juliet is feeling really neglected – and in fact is being neglected. Left home like a trinket and polished up and brought out when the occasion needed it – that’s how I felt Henry had come to regard her, as if she should just take everything and be grateful, rescued as she was by him. Who knows how her life would have gone if they hadn’t met?

Then the story deepens, Gillis holds more secrets that as a rising politician he wants kept hidden, Henry gets more dictatorial, his brother dies suddenly and everything become all change once more.

Then we move forward to when the cousins are older and they take over much of the story.
I think my favourite is Aiden, he really got lumbered with things, taken away from his first love of art to be plunged into the world of business, and it just wasn’t right for him. In families like that though its all about Duty. The friction between him and Piers gets worse and worse, its always been there but they were friends, it was just off the side of friendly rivalry, but it becomes a deep, bitter rift with Piers’ actions.
Gillis’ secrets come back to haunt the family, and the story moves in a kind of full circle, with a little drama but more just a story of a family growing when the world and its ways were changing.
I loved Joe, loved his farm and family, his quiet assuredness, and in comparison to the Grand Marsh Hall his farm seemed to adapt far better to all the changes. I loved when he talked about how many years it had been in the family, since Stuart times, and when Juliet thinks that makes the Wintertons and Marsh Hall seem like Parvenus…

Its a wonderful saga of a read, one to be savoured, and if like me you find the start slow, do persevere because it’d be a shame to miss this treat of a read.
Its very based around families and people rather than just Juliet and Henry,m as I’d expected. Beautiful ending too 😉 …

Stars: four and a half, that slow start almost made me stop this book, but that would have been a real loss.