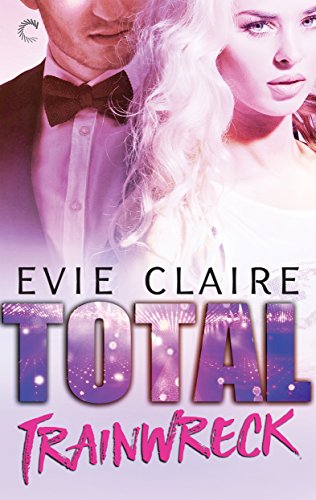 I’m a real sucker for the film/rock star romance trope so when I saw total train wreck I clicked request, got it, opened it and started, and was totally lost. Then, and only then, I realised it was book two and I needed to request book one, which somehow I’d missed. Jeannie Fail yet again 😉

Anyway, there’s so many in this trope that its hard to pick a winner, there’s an awful lot of ( in my opinion) dross among them so I tend to be a bit cautious usually. In the start of book one I was convinced this would be a fail for me, as I really didn’t like Carly,and wasn’t very keen on Devon, but I quickly became hooked on the story.

By the end of book one I had a better grip of them both, but was still cross at them so many times, Carly for being so changeable, she’d be hot then cold, sober then at the end of book one she crashes big time. TBH I wasn’t quite convinced after all they’d been through that she’d react quite like that, but it was a disaster setting right from the off, and I just knew something bad was going to happen. Devon was being very have-his-cake-and-eat-it in what he wanted andit was clear it just wasn’t going to work. I did love their chaotic, roller coaster romance, even if I was so frustrated, so angry at them sometimes.

Like so many Celebrities the life they really lead is far from the one publicised, and poor Carly, we learned so much about her awful childhood and yet there’s still more coming out, and I so felt for the child she was when it all happened, a kid with fame but no family so to speak, no one to care about her and what she wanted. She was just a money tree to her parents, to the studio, no one seemed to think about the child and that damaged her. Then this other awful thing happened and she seems to have closed herself off, coped with drink and drugs and shut down all emotions and kindness.
It comes through a couple of times, when she helps her old co-star Maria, when she talks to and is with her friend Spence.
I’m not really sure how he fits in but could see a book between him and Maria in the future. Hopefully 😉
Devon wants Carly but wanted/needed to stay in the HeaVon mould too, at least that’s what he thinks. Carly just can’t understand why, nor can I, but in this book we get the answer.
She tells Devon things about herself too and they grow even closer, but can they

free of all ties, get past old memories and make a future together?  That can’t  happen quickly though, we start this book right where book one left off, where they’ve fallen apart and yet still have two films to make together.

Heather,  as half of HeaVon, is determined to keep it that way, and she’s  terrific, a really grasping, greedy woman who wants the fame and money that being the other half of HeaVon brings and she’s not giving in. She has cards in her hand that could bring everything toppling down and its up to Carly and Devon to find a way round her huge block.
Its something I didn’t expect, didn’t see coming and worked well. I did feel though, after all the build up that this part kind of fizzled to an end when it deserved a huge bonfire earsplitting bang.

Like book one its an intense  read, a great debut and full of intense plots and dramatic characters.  I surprised myself in how much I liked these books, when to begin I really couldn’t feel for, empathise with the two main leads. For me that’s usually essential, but as we learned more about them, about their problems and see them making attempts to change I began to like them – a little, didn’t love them – but that’s enough.

Neither book was a cantputdown read for me, but they could have been that way with a few changes. don’t ask me what, I’m a reader not an author, I just felt there were areas that felt a bit lacking and undeveloped, and others that could have been cropped, plus of course I really wanted to love Carly and Devon, but never got beyond liking them, Carly more so than Devon. Of course for many readers they’ll be perfect just as they are – thats how it goes * shrug *

I’m unlikely to re read these two books, but the potential is there for stories to come that I may, as Evie’s writing style develops.  Overall it was a great duo, a wonderful debut story  and with the way she can spin drama Evie is an author I’ll be looking out for.

Stars: Five, a terrific read, full of drama and emotion, but probably a one off for me
ARC supplied by Netgalley and publisher