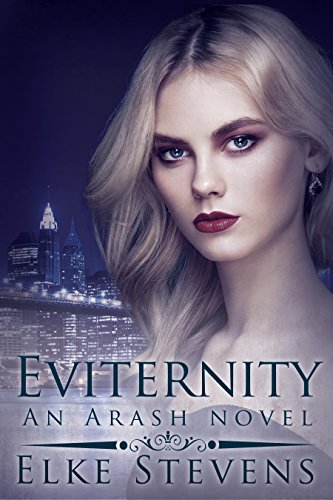 I loved the main Arash novels, and loved Ruth’s character in them – a “bad” character, a beautiful, vindictive and jealous b itch like Ruth adds such fun to a story, but as a main character? As someone who’s going to be centre of the plot and romance? Well, I wasn’t sure that would work for me, I so Hated her in the other books, could she really redeem herself?

Well, in part she does. I still find her cold and selfish but she does see her past actions in a different light, and recognise she was wrong in her actions sometimes, but she’s still making excuses and justifying some of the things she did. I was glad for her the way things worked out, but still couldn’t really warm to her, Elke did such a sterling job of making me dislike her before 😉

She’s in New York now, alone by choice, having left her family suddenly and told no-one where she is. She’s lost her powers and is trying to live as a human, even though its clear she sees them as “lesser”. She comes across Quin in the park, and Jeremy in her apartment block, and is attracted to both even though she thinks they’re human.
They’re very different to each other though, Quin is very aloof, they have an instant attraction and Ruth is surprised at her actions, how quickly she’s getting down and dirty with him. He’s hot and sensual when it comes to sex, but once its over he’s gone.
Jeremy never gets that far, is pursuing her but Honey, another family member interrupts their first two “dates”. Well they are dates to him but more a passing whim to Ruth. She’s still thinking of them as human and she tends to treat them as disposable, people to keep her amused.

Jeremy, Quin and Honey are part of James’ Arash family, and they are strange, not close like Ruth’s previous family, but all sort of detached from each other.
Ruth doesn’t realise they are Arash at first, they’ve a way of hiding their lack of shadow and she’s fooled. When she does realise they’re Arash, she finds they’re very different from her old family who pulled together even when they argued and disagreed with each other and worked as a team, – well, the others, not her when it came to Olivia!

The new family were a strange bunch, and I missed the closeness of Ruth’s old family.
I liked Quin, and adored Humphrey his dog 🙂 even though he comes over as solitary and at times uncaring about anyone else, and as I knew more of him my first instincts felt right. He’s the most caring of them IMO, and though he’s attracted to Ruth I felt at first that she doesn’t deserve him 😉 He’s full of secrets, in fact all the family are very cagey about discussing things.
Jeremy was a bit odd, he felt like one of life’s moaners – you know the sort, those who complain and complain and then when they get want, they want decide they didn’t need it.
Honey was like an enthusiastic puppy, desperate to befriend Ruth, and things like the scenes where she filled Ruth’s pristine white minimalist decor apartment with dirt and plants were amusing. She’s not all friendly though, could be quite sharp to the point of cruel at times.
Head of the family James seemed like one of those bombastic types, loud, controlling, need to be centre of attention, one of those who need adulation all the while, and though Honey and Jeremy seemed to play up to it Quin just did his own thing, stayed on the outskirts of the group.

The family are very concerned about a string of murders recently, of both humans and Arash. James thinks its linked to someone from their past, who they thought would no longer be a problem, but the signs are too close to what happened then and they’re trying to find out who’s behind it and protect themselves.

Its a fun read, more of the Arash story and Cosmos connection which is so unusual.
I enjoyed the story even though I still couldn’t bring myself to actually Like Ruth – I disliked her less, understood her a little ore and maybe got as far as being ambivalent to her…in time if the series continues I might grow to like her.

Stars: Four, fun to be back with the Arash group again