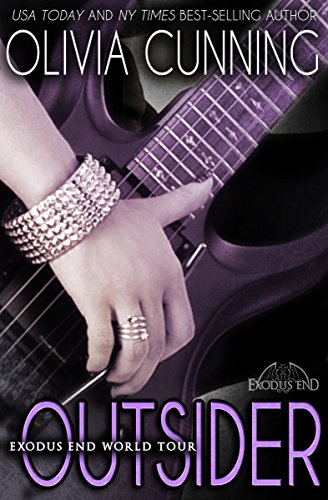 Well, I’ve been in love with Olivia’s writing since I first found Backstage Pass some while ago now. I loved the first Exodus end book, and was really looking forward to this. It was a great read but there were some niggles, small things but irritating.

Its Trey, Ethan and Regan again as with Insider and Double Time, but the members of both bands appear here and it was great to catch up with them. Its kind of another view of those stories, as it recaps much of the events of what happened there to Logan and Toni but from a different viewpoint, and of course brings forward the Ethan/Reagan/Trey trio.
I did find Reagans reaction to the leak about the three of them very strange, she supposedly knew Toni, was good friends with her but never once doubted she was to blame when things went t its up….Harsh I felt.

Trey is happy finally, has what he needs, not just wants but needs, a male and female lover, and they love each other as well as him.
There’s a flaw though, a barrier in that though he’s always been open about his fluid sexuality, Ethan and Teagan very much aren’t, mainly because of fear of family issues, but also for Reagan how the public will see her.She’s still finding her feet with the band, still very much on the outside, with a time limit to her membership of Exodus End, and there are events here that remind her of that.
This means that she and Ethan hid their relationship and Ethan also has to hide his love for Trey. I do really feel for him, he’s in a really awkward place.
I like Ethan, and loved his family when we finally met them. He’s got valid reasons for hiding his bisexuality, but while he was with Reagan his family were happy and unsuspecting. Now he doesn’t officially have her either and life is just one big secret for him it feels…poor guy.
I loved Reagan in Insider but here she comes across as a bit self obsessed at times and whiny too. That side of her I didn’t like, nor the Reagan that could drop Toni like a hot brick after being so close with her, how could she believe the worst without looking elsewhere?
I love Trey, right from first meeting in the Sinners books. There’s just something special about him. He is really pretty insecure, he always seems happy and easy going outwardly, but inside he’s very scared that Reagan and Ethan will leave him, take the easy relationship not the one with him that gives such issues for them. Yet neither Reagan or Ethan see how what hiding their real relationship does to him. They just focus on what it’s doing to themselves.

Its a story mainly about their relationship, how the public and their family view Polyamory. It feels in that way a bit too long, with parts drawn out that felt added just to fill, not to bring something new to the story.
I loved the scenes with the families, and Trey’s mum is a real darling.
Dare, Trey’s brother is always there for him, for everyone it seems, a silent support, a moderate voice in the band but I wonder who’s there to support him. He feels kind of lonely and that was reinforced in this book. Like many readers I am dying to get to his story, to what’s his background, and of course where he’s going in the future. I don’t yet feel as though I know the other band members so well as I do the Sinners, but its early days and that will come ( or cum as the case may be!)

Its a fun read again, full of Olivia’s scorching sex scenes, they burn up the page as always.
I enjoyed it but it didn’t have the magic five for me, just felt a little flat, maybe as so much had already been covered in Insider and Double Time.
It does make me wonder what’s going to happen to Reagan when her time with Exodus End comes to an end, will she be absorbed in as an extra member, will she just join Trey on tour like the other Sinners ladies, or maybe go it alone?

Stars: Four, a fun sexy read, but at times felt a little too drawn out.