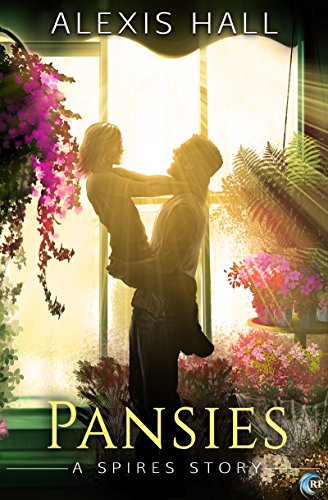 There are two M/M writers whose books I love, not just for the fabulous stories and characters, but for the way in which they use language, use the richness of words rarely seen, ones that sometimes I know but would never think of using, and other times have to get Kindle to look them up for me.
I love looking at where words originated, not just their meaning but how they evolved, what their roots are, and Alexis throws in lots to keep me looking. Of course if I was reading a print book and not using an e-reader I’d have to have a dictionary and I might not be quite as enthused.

Sadly literature and educations seems to be severely dumbed down when it comes to the beauty and variety in the English language – I’m as guilty of doing that too, so I love when an author really uses words, brings in not just ones that are about right but those that are perfect, fir the scene exactly. (K.J. Charles is the other author I was thinking of who uses language to its fullest)

So – the book…. Another great read, full of things to make me think, opinions that people hold that are common, but not right. How do we change culture though?  By one tiny step at a time, even if it feels incredibly slow.
Its stuff like Alfie’s parents, they know he’s gay, just don’t really want to know, he’s still their son, but their lack of understanding makes him feel lesser, and though he’s successful he seems to still be seeking their approval, and sadly it just isn’t going to come. They feel to me like the Gay is a choice parents, that their children can choose not to be gay – and there’s lots of them…
Then there’s Fen. I loved him, a real heart on sleeve guy and yet he’s got that inner core of strength in that he doesn’t see why he should change just to be accepted, and when Alfie tries to suggest he should be less flamboyant, try to be a bit more conventional male in his dress, tone down his pink tipped hair perhaps, its a classic of Fen saying why should he change, and Alfie just not understanding why he won’t.
I love that kind of thing, issues that make me think; I can see why Fen wants to be himself but its caused him such grief I can see why Alfie thinks maybe he could take an easier road.

What would I do? I don’t know – I’d like to think I’d be like Fen but remembering my own schooldays when I was bullied at primary school for wearing glasses, for having a darker than normal skin, despite my very white/English parents, for being skinny I’m not sure. When I moved schools at eleven I tried hard to keep my head down, to fit in, to leave all that behind me, and still feel guilty 40 years on that though I didn’t join in the bullying at that school I also didn’t stand up for another girl that was bullied. I was afraid to be a target again so this kind of issue reminds me of how hard it is to stand out against a crowd.

Alfie looks back at his schooldays and just doesn’t seem to realised what a bully he was – I guess its that Lads thing, where in a crowd they do what they wouldn’t on their own. Poor Fen really got the brunt of Alfie and his friends bullying, and its no wonder he thinks Alfie is out to trick him when he’s first approached. Who’d think the boy who bullied you for being different would turn out to be gay himself….

Its a great story, full of wonderful characters, Fen’s assistant in the shop – loved her, and her boyfriend, Fen’s dad, Alfie’s  friends in London and back home from his schooldays, loved the garage guy ( can’t recall his name) and his wife. That was a perfect fit in the book.

There’s so much realism here, in with a beautiful romance and once more Alexis has come out with a book that’s made me think about language, about issues and how would I react and made me root for the lead characters to find a way through what at times feels like a minefield between them.

Stars: Five, another wonderful story, full of great characters, real issues, problems and which made me really get lost in Fen and Alfie’s world.

We Were On a Break, Lindsey Kelk,

We Were On a Break, Lindsey Kelk,

My first read by Lindsey, although she’s written several books. Clearly her style is one that many readers love, but for me though I enjoyed this book its a one off read.

I just felt as though there was just so much dancing round the subject, that they were on, then off, then wondering were they on, were they off, and neither seemed to really know.
To be honest I felt like I didn’t really understand Adam’s reasons for not proposing in the first place, and though there were lines that had me laughing, for much of the time it just seemed waffle, that they were making a mountain out of a molehill.

Its a great view of how simple things can get misconstrued, how innocent meetings look very different to others, and how sometimes we kid ourselves about what we want, and justify things when really we know we are in the wrong.
I did like the story, did like the look at how we work at relationships and how easily things can go wrong.

It wasn’t just their romance though, there was the question of Erin’s work, she’s a vet working in her dad’s practice and he wants to hand it over to her and retire. The problem is he doesn’t want to let go of running it, making the decisions, and won’t let Erin make the changes she wants.
I think that’s a very common scenario with family businesses, where there’s not the same respect for a family member that an employee has. Its not intentional awkwardness, but more just not seeing things from the other the persons viewpoint.

Then there’s Adam’s family, a brother who invented and marketed a best selling app, and now has become frankly a real jerk, very I-am-the-man to his brother, his parents, even his wife too at times.
She’s one of Erin’s best friends, but since marrying Chris and having a baby she’s become very different.
Adam and Chris parents are…strange, in a way too, his mum seems to be on a journey to find her inner self kind of trip, and dad is just a keep quiet, eat the wheat free, meat free, sugar free, fat free, taste free meals and sneak out to the café for a bacon buttie.
They’re’ a fun bunch and all have a different input into the Adam/Liv saga.

So it made me laugh at times, passed away a couple of hours and was an easy read, but for me not a great one, not one I’d reread.

Stars: Three, a good read, just not a great one for me.