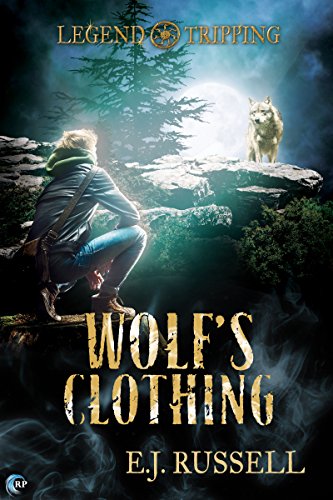 It wasn’t until I was writing this review that I discovered I’d read one of E.J.Russell’s earlier books, an m/m romantic suspense 🙂 this book is very different in feel and longer than that one, but I really enjoyed both of them.

I hadn’t read the first Legend tripping book, just the sample but there’s enough background given to let me follow what happened easily and get into the story and characters of this one.
Poor Trent, seven years being hung every night, its a sure thing Legend Tripping is off his menu now…I’d never heard of it, but it makes sense and is just the kind of things kids of that age do….I think from about 12 onwards I can remember friends all telling “ghost” stories, and being frightened out of my wits – I’m a true wimp, I’m far too easily scared to mess with that stuff!

So now Trent’s back, but is he 20 or 27? How can he pick up his life. His “grieving” family don’t seem so keen to have him back, he made far better press when he was dead, allowed his father to milk the sympathy vote. He’s in a kind of limbo, and its really understandable, I can feel just how confused he is.
After one more acrimonious confrontation with his father, who’s not keen to let go of his control and use of Trent’s financial Trust he jumps on a plane and goes back to where it all started. Portland. Maybe if he can talk to his friend Logan, his kind of casual boyfriend at the time, they can pick up or something.
Logan was there when it went down, wouldn’t give up on him and managed to find a way to bring him back, with the help of others. He’s in for a shock though, that fond reconciliation he had on his mind isn’t on, Logan’s about to marry Riley, the folklorist guy who worked out how to get Trent back.
He meets Christophe in the bar while he’s trying to drown his sorrows, he’s a sexy, well dressed Frenchman, and Christophe sees in him echoes of himself, someone who’s running from himself. They get to “know” each other, and to know each other 😉 and things could be good between them but for a huge secret, Christophe is a werewolf.
Now he knows about Trent’s background how on earth can he tell him he’s one of the supernatural things Trent hates.

Its a tender journey, backed up with the elements of the supernatural, and with a great cast of characters, Trent of course and Christophe, his brother Anton, and there’s Riley and Logan – a great pair, others from the TV show – I love OTT self obsessed Max! Then there’s Bishop, the detective who’s sure Logan is involved in the kidnapping of Trent – that’s the only story doing the rounds that would sound credible, saying he was stuck in a ghost war for seven years just won’t wash.
All these characters get involved in the story, and there’s some great drama and something/someone who caught me totally out. Did not see That coming!
I love to be surprised like that, have what I think may happen turned on its head.
I loved Trent and Christophe, thought Riley and Logan were perfect, wonder about Joseph, he was stuck in the ghost war for 63 years…and Bishop, I just feel he’s got some kind of connection to the supernatural.
Its a fun read, with a take on werewolves that I hadn’t read, with things I didn’t foresee and a terrific ending.
Its not deep dark drama but a fun and spicy romance with a light elements of suspense and lots of the supernatural.

Stars: Four, a fun read, with light suspense and something that totally caught me out.