The Other Wives Club, Shari Low

The Other Wives Club,  Shari Low 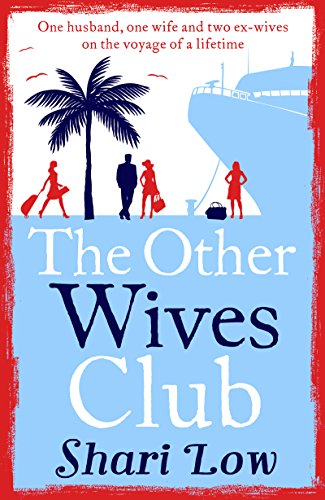 My first Shari Low read, I loved it and have already discovered she’s got more stories out on KU. I love that, a small subscription gets me loads of fabulous books….I couldn’t afford to buy them all, and as I’m a quick reader its a great bonus for me.

This book is just such fun, light and funny, and yet underneath all that froth there’s some serious drama going on.
Fabulous characters, I loved Sarah and the t it cakes… “wheeled out an enormous bosom, its modesty protected only by a huge white frilly marzipan bra” Can’t you just picture it? When she’s talking to one of the others about work stress, she says that at least for her the stress only comes in the form of a misplaced nipple…
She was a wonderful mother, had a great friend in Patsy, and was still fond of Drew, though she could see his faults. When she described their marriage, how one teacher thought she was a widow as Drew was never there through all their son’s schooldays, how every event got cancelled, or she’d go to it alone because of yet another work crisis, I felt so, so sad for her, but she’s not bitter. She can see that its part of Drew, and that’s why things didn’t work for them, his job came first.
Of course his fling with the eventual second Mrs Gold, Mona, the b itch who still works with him didn’t help. Through Sarah’s eyes we can see how manipulating she was, that she didn’t care if he was married, wasn’t bothered about his kids, she wanted him and that was it.
Mona hasn’t changed, although now she’s married to Piers, another rich guy, richer than Drew which is just as well the way she spends money. He’s on the cruise too, along with his son from an earlier marriage, Max, and we see that she’s still Mrs Manipulative, having pushed events so that they all got invited.
I loved Mona’s character, really nasty, jealous, manipulative characters like her add so much fun to a story. Its boring if everyone is good 🙂
Then there’s the current Mrs Gold, Tess. She’s much younger and loves Drew, but she is finding the cancelled meals, events, holidays hard to take. She’s got a wonderful friend Cameron, and they joke he’s the stand in for Drew, filling in at events Drew cancels. He drops a bombshell on Sarah right before the cruise.
Surprisingly she gets on really well with Sarah on the cruise, they’ve not spent much time together before, but have that same sense of fun and adventure, and things conspire to throw them together a lot. She’s trying really hard to stop the cracks in their marriage from spreading, but it seems Drew is still the same work-comes-first person he was when he married Sarah.

There’s some fabulous humour here, some great lines that had me sniggering – the speedo shorts – who wears them apart from competitive swimmers? Budgie smugglers I saw them called once and its an apt name!
There’s another quote after Sarah saw rather more than she wanted to of Mona’s gynaecological area and how bare it was, she decides hers too now needs a trim. “ Her lady garden wasn’t quite fully mowed, but it certainly wouldn’t be requiring a Flymo anytime soon”  🙂

Alongside that humour though is the very real things that happen when such a disparate group of characters are thrown together.
Drew seems so blinded to everything, doesn’t seem to see he’s repeating the mistakes that made his first marriage fail, just swans along blindly, dispensing bonhomie along with credit cards and cash. He’s a good man, means well but selfish really and so, so blind!
Mona had an affair that ended their marriage, she’s been cheating on Piers for most of their marriage – and he’s not entirely innocent either- and now she’s tired of him. Its pretty clear where her desires lie now.
Throughout there are little get togethers, big gatherings, dinners, breakfasts, spa visits, outings ashore and events that don’t always go to plan. I was wondering all the while did I want A to be with B? Did I think C would stay married or was D going to intervene, or maybe E might prove a stumbling block. And what about F, G and H? Where could they fit in?
I had ideas about who I thought suited each other, who I wanted to be together but Shari kept me wondering, were they really right for each other or would they be better with someone else. How could that happen, and what now?

Its a book that kept me guessing right to the very end and was such a fun read, I loved it and am off to find what else Shari has written.

Its a story for when you want something light and fun, a book to make you laugh, but with characters that feel so real you are rooting for things to work out for them. Or not to work out for others!!