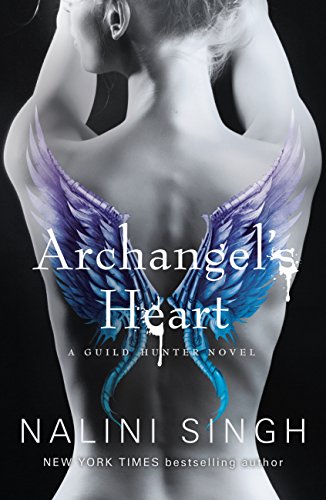 Well, I’ve loved this series since I read the first one aggees ago 😉 and reread some of my favourite ones from it.
Its a series that’s changed hugely since then though, evolved much the same as Raphael has! I think its one that though each book is more or less complete, you need to start at the beginning, because there are so many characters, its such a complex world that jumping in cold with have you lost.

So, I knew who everyone was and yet I still had to keep thinking back to how exactly they all fit together. There are so many characters invovled now that a list of who is who and how they connect would be useful!!
This book is more a part of the overall story arc than an individual romance, as some of them are.

The archangels have been called together to discuss Lijuan and her territory. Who can call the group together though? I mean, they’re very much autonomous beings, but we learn of a new group, a  kind of overall order put together aeons ago for just such a purpose, as well as finding their own paths to Luminescence, a kind of personal goal of perfection – kind of like our mystics and religious wise men. ( Why are they always male though – the Luminata seem to be too – I can’t remember any females there).
They don’t call archangels to account per se, but  see when they need to meet to discuss something important. At the moment they’re dealing with the Cascade and all the side effects of that, the fact there are eleven archangels, unheard of before as there are only ten territories, each are jealously guarded, and of course there’s Lijuan who’s been acting more and more deranged, causing such major issues for angels, vampires and mortals alike with her insistence that she’s a Goddess, and therefore above everyone and everything.
Seems simple doesn’t it – she’s not around, meet to decide if she’s dead or asleep, and what’s going to happen with her territory. At the moment its bringing bloodshed to the borders that needs to be stopped, as without a ruler in effect some of the vampires are going on mass killing sprees.

Only archangels and their seconds, plus consorts are invited – and the archangels have to go, to not appear is to forfeit their territory. Its a real royal summons…
Michaela is her poisonous best, though maybe that description should be for Neha, she’s a real nasty, still holding Raphael guilty for killing her daughter, though it had to be done.
I loved seeing more of Aodhan, but missed Ilium, (sparkle and bluebell!!) love the friendship and banter between those two.
Raphael is at his commanding majestic best, with Elena keeping him a bit on the humane side. Archangels do tend to dismiss mortals, even the ones we think are more compassionate and some of the discussions here about the local village show that really well.
I did miss seeing the Guild personnel, and the vampires, especially Dmitri and Venom.

Lumina though turns out not to be the peaceful place they all imagine, and the events aren’t as simple as they thought. It actually gave me nightmares after reading one night, not that its a horror kind of read, and no worse in the violence than any other in the series. It was the creepiness of the Luminata that did it for me….It’s a place full of hidden secrets masquerading as something else. Question is are they important secrets, what are they, why and how did they happen, and how does all that fit with the purpose of the place?

Still, I don’t regret reading it, despite the bad dreams!!
Its a fantastic read as always, bringing in all the archangels, a new group in the Luminata, answering some long held questions, and revealing more about Elena’s background.
Its not my favourite of the series, those tend to be the more romance centred ones, and the ones centred around Raphael’s territory, but as part of the overall story its moved things on a great deal.

It’s one of the few longer series that’s got so much going on each book still feels fresh and exciting. I couldn’t get in to the Psy novels, read the first ages ago, but wish I could as that series has got so many now and I love ones like these.
Maybe its time for a reread, sometimes I find that on second reading and with the passage of time I’m in a better frame to enjoy stories that didn’t grab me first time round.
Of course there’s the usual issue of time and cash 😉 to contend with too.

Stars: Five, one to keep, to savour rereading – preferably after reading the first book.