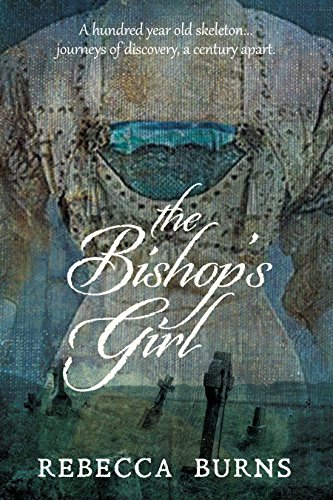 I’d not read any of Rebecca’s work before, so when she asked if I’d like to read this I was intrigued. The more I read the more I too wanted to know the story behind the young girl’s skeleton.

Its a dual timeline story, parts are in the present and then as bits of the past are revealed through Jess’s research, the story drops back so we can read what actually happened, as well as the little the research shows.
As the novel progresses the past/present becomes much closer so there’s a brief chapter on what the research suggests and then we whip back to see the story as it happened. Sometimes I get frustrated by dual timelines, when they get me so absorbed in the past and then the next chapter is the present, continues for ages til I get absorbed in that and then changes back. This book manages to avoid that though, lets snippets of the story out but always with a mind as to what’s happening in the present.

I really enjoyed this, its part historical in that the late 1800’s and early 1900’s are in the story, but it also features hugely in the present.
Jess, I liked her. Typical wife and mum, she works as a researcher but the past six years her own work has had to take a back seat to this project Professor Waller wants uncovered.
The professor is a Bishop Shackcloth devotee, has written reams about him, and due to retire this year wants to go out with a bang, revealing the name of the mystery woman buried with the bishop. He’s not into actually doing too much himself though, pushing Jess to spend all her work time – and a good bit of her free time, so he can whip in at the end and present the work as his own. Annoying isn’t it? He’s a horrible man, and I’m guessing this farming out work to others and keeping the glory, the credit for himself isn’t uncommon. All that time though I kept wondering why Jess did it, let herself be pushed into making her own work not priority. Maybe its the way academia and research posts go? I don’t know.
Towards the end Jess also gets irritated about the unfairness of the way she’s always treated by him. Her marriage is under strain too, she’s not sure why, but there’s a growing gap between her and Alec, they don’t seem to talk any more, don’t really feel like a couple, with this strange silence between them. He’s not interested in sex either so of course when her friends son Hayden makes approaches she’s ripe for responding.
She wants to be needed, desired and Hayden does that. She’s worried though, what’s she doing? Where is it going? What about the kids and not least, her marriage? She still can’t seem to resist Hayden though, and in a way I could understand. Its something that many marriages go through as life, work, kids change us.
Her colleague Billy was a surprise too, turned out very differently once we got to know him, and his home life was a real shock and so, so sad. I didn’t like him to begin, coloured I think by Jess views of him, but like her once I got to know him I really felt for him, he was a wonderful man.

The characters from the past; the Bishop – he was so likeable, so full of energy and determined to do good, and yet…he betrayed his long time friend, betrayed his morals, was shameful to the ladies involved, and it was hard to reconcile that to the man who was so wanting to help the underclass, who’d roll up his sleeves and muck in, wasn’t afraid of hard work, dirty work, to improve peoples  lives.
Even now its finished I’m still confused about how I feel for him, admire parts of him, but I’m so angry at his other actions, where he took the cowards way out, abandoned those he’d let down.
Josiah, I liked him, but he seemed to have blinkers on about not only Shackcloth, but his son Edward too. I was amazed that as a doctor he didn’t realise how ill Constance was, again maybe its a time thing, she wanted to hide it and he didn’t look hard enough.
I’d kind of guessed about Edward, sad part of that time period, but that still didn’t excuse his behaviour to Allegra, or later to Violet.
Poor Allegra was really an innocent caught in the manipulations and desires of others. I so felt for her, especially towards the end.

I loved the way we got to see how research works, how tiny fragments and hints that could so easily get ignored, track the path towards the true story. It really is a case of trailing every little thread, knowing that so much will turn out to be nothing.

Its a really sad story, and yet the end was in a way satisfying, I enjoyed seeing what had happened, how it all fitted together.
I loved that Jess came to see the skeleton as a person, not just a mystery leading to fame in the field for finding her name, as the professor saw her. She wanted to give her some dignity, and I think doing that helped Jess take back her own dignity, see herself as a person, not just a wife, mother, research assistant, but a person in her own right, who could and should take charge of her own destiny and choices.

The romance angle isn’t a conventional one, but is there in the scenes with Hayden, and then what happens after, and to a lesser degree in what happened in the past.
It feels to me like the ending is a time of forgiveness all round, for Jess and Alec, for Hayden, for Shackcloth , for Edward,Violet and Allegra. They’ve all done things they regret, but by the end it feels like everything had turned a corner, that the circle has joined and all has the potential to be well again.