Nightshade’s Flame, Book One of the Werewolves of Rebellion Series, Ana Lee Kennedy

Nightshade’s Flame, Book One of the Werewolves of Rebellion Series, Ana Lee Kennedy 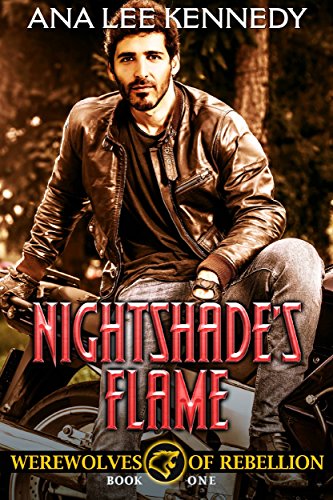 Another shortish read at 3342 kindle locations 😦
I really prefer longer reads, but this one had enough length to make the story work for me.
Its always tough for the first book in a series, has to deliver the characters, world setting and a story to keep reader hooked and that’s a big ask. This one did OK for me, it wasn’t a gripping read but was a solid one, with promise of a good series to follow.

I liked the premise of Bernadette being a true crime writer, and researching for her next book about MCs and the way they operate. She was a good lead, strong and confident, and a really genuine feeling person.
I’m OK with the insta lust between her and Frank, president of the Werewolves of Rebellion. It felt real, and sometimes when people meet there is that visceral instant attraction. Of course in fantasy that usually means a bit more, the old Mate stuff… and of course there’s the conundrum that Frank isn’t looking for more, plus Bernadette is human and also not looking for a relationship.
The others in both MC clubs were a good mix of people and solid for later stories.

The issues raised were good, felt real and so did the characters. I really enjoyed the day to day side part of the book too.
Scary Mary I felt was a little jarring, I’m not really a fan of people like her, shrouded in mystery but able to crop up and help at a crisis. That’s one of my niggles, along with another that occurred here, where people have some unused/unknown supernatural talent which comes in just at the right moment…I just feel its a bit of lazy plotting, “Oh no! We’re all/he/she is in grave danger, there’s no way out” – and then some new supernatural talent pops up for one of them. Doesn’t work for me, I want them to use skills I know about, and that have been learned solidly.
Still, that was a small niggle in the context of a decent story that I enjoyed.
I liked the way the club was a working farm, as well as a motorcycle specialist shop. I did struggle with the funding, somehow didn’t expect them to be quite so tight to the line when the figures were mentioned. They talked as though it was close to the club being broke, when in fact the sums mentioned were relatively small.
Still I guess in such a rural area work and jobs were hard to find and that’s why money was just so tight.
It wasn’t a five star read for me, but a solid four and I look forward to reading more about the group/s.

Stars: A solid four and a good start to the series.