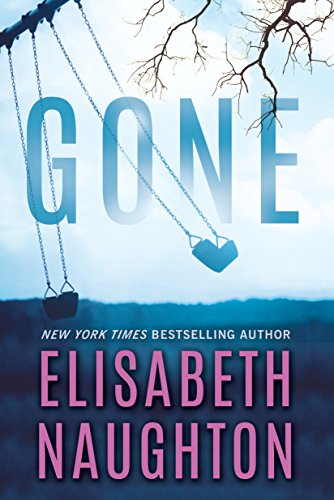 I’ve enjoyed several of Elisabeth’s novels now and Gone was an interesting and absorbing read.
It’s a mix of romance and suspense, with each balancing the other perfectly. The romance angle – well, I always love that and Alec and Raegan were perfect together – was believable and the suspense part of the story added to the romance to make for an interesting read.

Sadly abduction is all too real for many parents, and crises like this cause a rift in the most devoted of couples. Everyone copes differently and sometimes that means they simply fall apart and no longer need each other. That’s kind of what happened with Alec and Raegan. Raegan doesn’t blame Alec, it could just as easily have happened when she was looking after their daughter Emma, but Alec can’t let go of the guilt and blames himself.

Three years on, the couple are brought together. They divorced but neither have moved on, can’t let go of the other. While they were apart they coped, but now when they meet it stirs up old feelings. They can’t admit it though, Alec is still full of guilt and Raegan is still very hurt that he let her go, didn’t lean on her but grew away.

It turns out this latest girl isn’t Emma, but reporter Raegan is charged with looking into this and the past abductions by her boss.
She’s always believed Emma is alive but had no real links to work on. Now there’s something concrete, and she’s full if zest to research and hopefully trace Emma. Alec though has shut his mind, he blames his father and is convinced he killed her.
Things happen, they fall into working closely and the pull on them is still there, that old fierce attraction.
Alec had descended into alcohol to cope after Emma’s disappearance, but he’s not drinking now, has been teetotal for some time, and as part of his reparations needs to apologise to Raegan. This proves the time to do it, and he agrees to help her research, still convinced that Emma is dead, but seeing that Raegan needs some closure. He’s also concerned that she’s in danger from his vicious father who’s due for release from prison. To his surprise though they find connections between the cases, and links that bring them both into danger.

Its a story that felt so real, I loved the interviews with other parents of abducted children, they were interesting, and I enjoyed how the links were slowly revealed, all the clues laid out letting me work my own way to a conclusion.
Of course I had the advantage of other points of view, of knowing a bit more than they did. Still, as I worked out who was behind events I was shocked, and its a story that really could happen, could be real and for me that makes a novel far more readable.

Its a story that flows well, that lays out clues and ties up ends neatly, that felt real, with characters I could empathises with in some cases, hate in others. I need all that in a novel. The suspense angle was enough to keep me reading, but not so much that I switched off, and allied to the romance made for a story I really enjoyed.

Stars: Four and a half, an absorbing, realistic romantic suspense.