A Promise of Fire, Amanda Bouchet

A Promise of Fire,  Amanda Bouchet 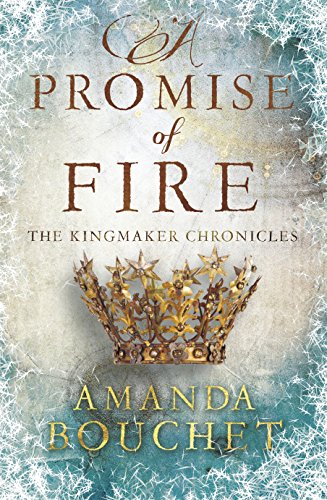 I’ve been really lucky this year as regards debut books, and read some real crackers. Its always a leap into the unknown, will you like the authors writing style, the way the story is delivered, the type of character? So when it goes well for me I’m happy 😉
Nothings worse that writing a low star review on a debut book. Authors work so hard, but not all stories will suit all readers, it doesn’t mean a book is good or bad, just for that person its good or bad.

Anyway, this is one of those fantasy reads that can cross age limits, being suitable for teens and YAs, as well as those like me long, long past that. Its a fascinating story with enough romance to keep me hooked, for me that gives a story something special, and some cracking magic.

Its not a historical LotR type fantasy, but one that brings in Olympus and the Greek Gods and Goddesses.
I really enjoyed the crossover, the way snippets slide into the story, reminding me of things I’d read as a teen. I had a real kick then for Greek and Roman legends that’s never really left, they form the backbone for some incredible stories.

That framework backs up the story, with Cat being someone in hiding, with certain magical traits, most of which she hides.
There’s a mystery about who she really is, where she’s come from, and unlike some stories where its clear early on, there are clue, but things that also point a different way. I’m 99% certain I know now, but still have room for a little doubt. Its a story that brings things out of nowhere, so there’s still room for her to be someone other than who I think.

So, she’s hiding out in the circus, among people that are as close to family and friends as she’ll allow. They make you weak, that’s how she was brought up, and there’s some horrific stories about how she was taught that.
Its become instinct now and when Griffin finds her and abducts her she fights, hard and strong, but he’s very devious.
Its clear fairly early on just how single minded he is, and having determined his family who have just taken over a region ( a family without magic, something unheard of formerly) need her he’ll stop at nothing to bring her to them. He wants her to go willingly though and of course only knowing what she reluctantly reveals about herself he doesn’t understand just why she’s fighting so hard.

As the journey goes on feelings change, a mutual respect is earned between Cat, Griffin and the other three soldiers with him.
They go through some tough times, fight off magical creatures and human enemies. The ties with Olympus and the Gods are revealed, but no-one ever quite knows how they will respond. They can be fickle creatures these Gods, and catch them at the wrong moment and no help is forthcoming. They’re constrained by rules too, so you can never quiet predict how things are going to turn out.

Then when they reach the destination the story doesn’t stop, Griffin is still pursuing Cat romantically and she has come to have feelings for him she’s scared to reveal, partly from her people-make-you-weak upbringing, and partly because she fears making him a target. The new reining family have lots to learn, decisions to make and need to guard against being overthrown, either by their own people, or the other two districts.
I loved the family, loved their optimism, kindness, sense of justice and fairness, and the way they took Cat to their hearts so quickly.
I really liked getting to know the other soldiers along the journey and how things changed, and how they were all still close once back at the castle.
And of course Daphne, I love someone like her, a perfect nasty character, full of jealousy 😉

Its a great start to a series/trilogy, I’m not sure which, but I do know I want to read more from Amanda.
Though its part of more, the story has a “for now” ending, not a cliff-hanger, just hints that more is to come. For me that’s perfect – I HATE cliff-hangers, hate them. Nasty things, by the time the next book is out they’ve lost impetus, but when I’m reading the one they’re in its frustrating! So hurrah to Amanda for not doing that!!

Stars: Five, a fresh, fabulous, fantastical “realistic” read, with a good dose of romance that fits within the story, doesn’t overtake it.