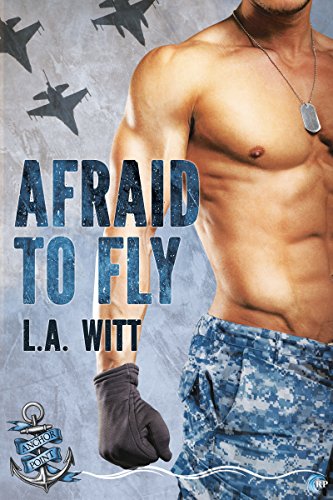 I loved, just loved, Just Drive, book 1 in this series, and was hoping for more of the same.
I love LA Witt’s writing, and was ready for another hot and sensual, tender but real romance. Sadly though I just didn’t feel it here….
I did love the sneak peeks of Sean and Paul from book one though, that they were getting ready to marry. terrific to know that they lasted, that they were getting their HEA.

So why wasn’t this one another winner for me? Well, as a chronic pain sufferer I know how debilitating and depressing pain can be, and the need to mask the effects if you don’t want to be a down on everyone and every outing. Clint though, his pain was so intense I really didn’t see how he could keep it so hidden. I could see why he wanted to, he’s a career Serviceman, and a bit longer and he can retire gracefully, on a much better pension, and sadly that extra money is needed when you have health issues.
I just felt his pain was overshadowing his whole life though, it was literally running it, where he had to plan what he could do to hide how much he was hurting. I know only too well that sort of pain isn’t going to go away, isn’t going to get better, and it just seemed a bit too depressing knowing his life didn’t have an upside.

Even when he met and got together with Travis they seemed to just have a HFN, and I wondered – all the fears he has for their future, would he be proved right?
There wasn’t any way I could see that things would change, and I felt a bit left in limbo as far as the future for them and his fears went.

Travis too, his issue with the kids and his ex, I needed to know if he would get to see them, how they would take his news etc. There was a tiny little bit of light at the end but its very ambiguous.
I so felt for his problems, and wondered – does that really happen? Where something so traumatic happens that it affects people that badly, gives them PTSD and yet they can’t even discuss it with a Service sanctioned counsellor?
Way to leave your staff in limbo.
Pretty disgusting and yet as with so many jobs the Services depend on fitness both mentally and physically and both these guys had so much to hide to keep their jobs, after they’d sacrificed so much for their country. Made me think for a bit about real life, how these kind of situations work.
As a drone pilot I could see how people like Travis would get sneered at if they had issues with what happened, safe behind the lines, and yet the effects of what they do are the same as those pilots who drop bombs from a plane and then are miles away when the blast hits.
Tough one, and I guess Forces life isn’t built for sympathy and understanding, more Take-it-like-a-Man stuff – even for the women 😦 US and UK seem to have the same attitude here.

I think its that eternal down-ness of their problems, the way nothing seemed to be resolvable that made this book an Ok-but-once-only read for me, it was too grim, bleak and unremitting.
I need some light at the end of the tunnel and TBH I just couldn’t see it.

Sadly  I could believe that Travis would get tired of Clint’s issues, love – even the strongest – doesn’t stop people getting frustrated, however much they understand the causes. Pain like that doesn’t get better, only worse, unless there’s some kind of new medical treatment out, and nothing like that was suggested for Clint.
Likewise Travis’ mental stress, without being able to discuss the cause with a trained counsellor how could he get past it, stop the nightmares, avoid the triggers, and would Clint in time decide the lack of sleep was exacerbating his pain, that they just couldn’t be together?
See, that’s a real issue for me, I just can’t see how they can get the happy future I want them to have, without some interventions…just understanding and sympathising with your partner isn’t enough to stop the problems, and keep both happy.

A few hints on what could happen in the future to benefit, surgery perhaps for Clint, some psychotherapy and counselling for Travis, a way to move forward with a slightly easier life, and this could have been a story I loved as much as the first, but as it is though its the usual perfectly written story with believable characters and situations, its just too bleak, dark, grim for me. Real life has that, I want somethng positive when I’m reading, some hope for a HEA for characters.

Stars: two, a real shock for me, a two star LA Witt story, but this one just didn’t work for me.