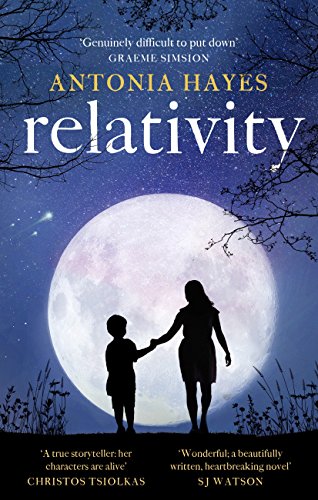 This is a really hard review to write – I really enjoyed most of the novel, it had some excellent moments, but its so hard to say why I liked parts and not others without giving the story away….
It reminds me of many Jodi Piccoult novels, where I see what’s happened and how people feel from both sides, and she puts things in a way that makes me feel even though my head is saying You can’t possibly like someone who…..

I loved Ethan, he’s the real star of this book. He’s way ahead of his peers, and most adults too, when it comes to all things math and physics, and yet he’s also a typical 12 year old boy.
Having had my own kids and grandkids I recognise his traits, and really felt for him. At school he’s the odd man out and kids can be incredibly cruel.
I felt when the docs were looking at him “seeing” physics and getting excited it was more for the fact that it would get their name attached to a new discovery, rather than anything to Ethan’s advantage.
I think that’s something that does happen in the medical profession – that patients become cases rather than people, and docs forget that they have real views, needs and emotions, that they are people first and conditions second. The doc was keen to write about Ethan to his peers, to write papers, maybe a book and yet he didn’t seem to think about the impact this kind of fame would have on Ethan, a 12 year old boy who’s already got some serious issues to deal with.

Claire – his mum – I wasn’t so keen on, she adored him and had given up so much of her life to look after him, but she seemed very unemotional, and when it came to Mark, the man she had loved, she was incredibly judgemental. I can see why when we know more about her background, she’s a perfectionist, always been striving since a toddler to please her mum. One strike and you’re out.
I did think though that any parent knows that feeling of desperation, and she could have been more understanding, looked more at the Mark she knew, had been with for years, and not the Mark of a seconds action.
That’s where the Jodi Piccoult comparison comes in, she does this to me too, makes me feel sad for people who’ve done awful things, makes me look at things from both sides and see the grey. For Claire its all black and white, there is no grey, you’re in or out and Mark is decidedly out.

Mark, I thought I’d hate him but when we got to know him, learn about his background and the pressures he was under then maybe, just maybe, there’s leniency.
Most parents if they are honest have had times when they are desperate, tired, emotional, irrational and don’t know what to do next when in his situation. There’s a real difference between that and a continuing one. A spilt second can change lives as we see.

They’ve been apart now, no contact for 12 years. Then Mark’s dad is dying and he comes back to the city where they live. He writes to Claire and the letter gets intercepted by Ethan, and that’s the catalyst for a whole string of events.
Ethan had been asking about his dad, and although he hasn’t let Claire see its easy to understand how he feels different already at school, and not having a dad just reinforces that. The fathers day cards were heart-breaking.

There’s lots of physics, maths and astronomy in this book, and as I am pretty useless at that side of academia so much passed me by, and yet I was able to follow the intentions without needing to know how it worked.
Much of that part made for some beautiful moments, added so much to how I understood Mark and Ethan, its something they both shared, a very special ability to be curious about the world and how it works.

I loved Quark the rabbit too….poor Quark. And Alison, the girl Ethan met in hospital, he really needed a friend like her, they had a typical early teen friendship, where they both had differences from other kids and desperately needed an understanding friend.
She was a terrific addition and let us see yet another side of Ethan, the child side, and understand his fears and thinking, when he talks to her in a very different way to which he can talk to Claire.

Its a book I really enjoyed reading, moved me to tears sometimes, and I was surprised at how sad I felt for Mark, overall he lost so much for something that many of us have come close to doing if we are honest. That doesn’t excuse it but does make me understand him a little better and feel for him.
Although Claire didn’t do anything, in the context of events and how they played out she wasn’t blameless, she could have seen that things would have been difficult, it was clear they were all struggling,  though of course never predicted what would happen.

I really, really, really wanted a HEA, I’m a romanticist, and for a long while I hoped I might get it, but its more of a better understanding all round, forgiveness and acceptance.
I really felt for Mark, wanted him and Claire to find a way forward – maybe in the future, in my head 😉
It’s not billed as a romance read of course, but I’ve found sometimes that even then sometimes books do have romance, so I was hoping.

Stars: Four, its a book I really enjoyed though not one I would re-read.