I’ve not read this yet, but just been notified its on a pre-release special price of 99p. Rie’s reads are always hot and steamy and have a strong thread of sharp humour running through, with a solid story backing up all that heat. Regular readers of my reviews will know that’s Essential for me, sex without a decent story is just Meh, and Rie’s books are never that 😉
If you enjoy hot and steamy reads, solid stories, realistic characters and sports romance take a look and grab it now while price is still low.

She’s NFL royalty. He’s the star quarterback of a tanking team. When she takes ownership, balls will roll . . . and the truth will out.

Rafe Macintyre—the rocket-armed Carolina Crush quarterback—has nothing to lose and everything to prove. All because of one woman . . . Miss Peyton Fox. When the tough-as-nails chick takes over as team owner, Rafe is ready to turn the epic-fail season into a Super Bowl championship. But the winning has to start with Peyton’s love.

No stranger to playas on and off the field, Peyton Fox is born and bred NFL royalty. Been there, done him, and called the plays even before she took up the Carolina Crush crown. She has zero time for a love life and even less time for games unless they happen between the endzones. Unfortunately, Rafe Macintyre has one hell of an arm, and he’s full of hot southern charm. He’s not too bad to drool over either, but it’s been five years since she tangled with him—a mistake she doesn’t plan on repeating.

The consequences of one night of rebellion will last a lifetime. It’s all fun and games until someone gets knocked up

Breath of Fire, by Amanda Bouchet

Breath of Fire, by Amanda Bouchet 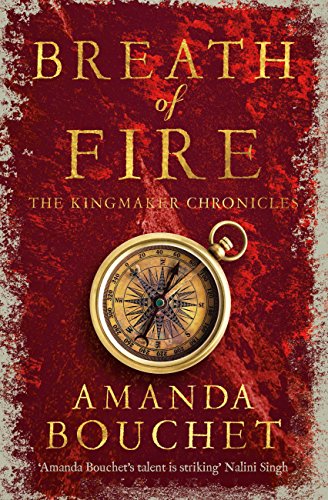 Back when reviewing book one I wrote “This is one of those fantasy reads that can cross age limits, being suitable for teens and YAs, as well as those like me long, long past that. Its a fascinating story with enough romance to keep me hooked, for me that gives a story something special, and some cracking magic.
Its not a historical LotR type fantasy, but one that brings in Olympus and the Greek Gods and Goddesses.”
Book two has all that and more.

The story continues with the main characters facing death and disaster from humans and magical creatures alike, in their Quest to bring peace and end the reign or terror and raise up the standard of living for all the citizens, not just a favoured few living off the backs of the rest.
Its easy when faced with the kind of destiny they’re looking at and the sucess they’ve had so far to let the power go to their heads.
Cat, Griffin and friends aren’t like that though, Cat’s background gets revealed and we know already just how much she’s been through in her short life.
Griffin comes from the other side, the non-magical folk, ones that do the hard manual work and are always subject to the whims of their rulers. He has a vision though and its aligned with that of higher powers who seem to favour his ideas. Cat is central to his and their quest for a new regime, for peace, for fairness for all. They want a world with a hopeful, peaceful future for all the citizens, a world free of torture, slavery, all the things imposed on the non magical folk that currently provide enjoyment for a favoured few.

I love the relationship progression, Griffin is so protective of Cat and yet doesn’t try to stop her from doing what she needs, encouraging her when she faces her very natural fears.
Once more they face Gods and Goddesses, (and Kato gets to find that you can have too much of a good thing!) fierce, deadly magical creatures, as they take the next step in their journey.

Its a fabulous book, that touch of romance lifts in from just a fantasy read and beings in the personal side, and yet sensual though it is it never overtakes the story, never overshadows the magic that’s happening around them.
They’re learning a lot about each other too, becoming a tight knit team, learning to trust each other fully. Griffin has had their trust and pledge for a long while but now Cat’s in the team and they look to her as a leader too. She and Griffin both have their own specialities, and when needed they’re happy to let the other take point, lead, make the tough decisions.

Back in 2014 I read a YA story that I felt would be perfect for film. The Paper Magician trilogy has since been snapped up by Disney, and I think this trilogy too would be perfect for the big screen. Its got so much in it, the romance thread  which I love is just enough for those like me who enjoy that angle, but won’t put those off who profess not to enjoy “romance”, the magic is fabulous, gripping, exciting, almost bloodthirsty at times but without too much horrific descriptions  ( they made me queasy, I’m a wimp, I know) and welded throughout is the message of fairness, of taking into account the effects of things all all members of society, of morality, kindness, and there’s a very clear Right and Wrong barrier in behaviour.

This read follows book one quite closely in release time, which is great, the story is still fresh, sadly though part three isn’t due out til Jan 18 😦 Still, it’s definitely one for my keepers file for re-reading right through all three books.

Stars: Five, terrific read, more magic and mayhem, with romance and Right on Cat and Griffin’s side.