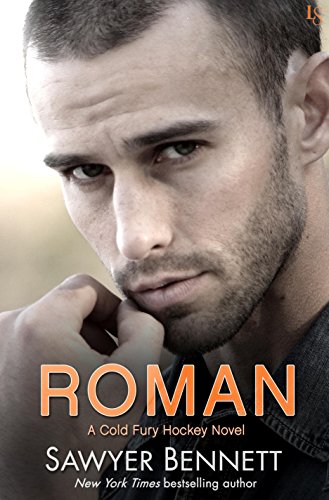 I love Sawyers writing style, the way she creates characters that I find feel real, that I can believe in, and plots that I could see happening.
Well, almost all, there’s a couple that haven’t worked for me, but then each book is individual and even if I love an authors style that doesn’t mean they’re an auto buy for me.
I’ve enjoyed a couple from the Cold Fury series, each are stand alone but the characters are connected via the CF team so you don’t need to read them all to follow the series. I’m not a sports enthusiast either, have never seen an ice hockey match, its not a big sport in UK….but I still can enjoy this series as it just provides background and a setting for the plots.

So – Roman, bad boy and proud of it, its what he’s known for, brings results, keeps him in the public eye, and makes him money.
Its kind of unfair the way manager Gray pushes him for it as its one of the reasons he’s so popular, and why her team wanted him in the first place.
Dichotomy time: she wants him to be bad enough to help the team win, to bring in the publicity, but not that bad that it brings the team into disrepute. Roman’s got a tough line to straddle, trouble is they’re not agreeing where the line is drawn.

Then Lexi comes into the story, waiting to meet her father – and give him the news that he is her father – she gets chatting to Roman. He’s entranced by her and they start dating.
Brian, team owner, is convinced by her story right from the off and delighted to meet her, but his other daughter, Gray, isn’t so convinced and is pleased he’s having a DNA test done – Lexi’s suggestion. She comes to like Lexi though while they’re waiting for results but isn’t so keen on her dating Roman, for her the team is mega important and she worries that Roman may bring negative publicity to them if things go wrong between him and Lexi once the news of who she is gets out.

Its a great story, with a second helping of romance between Lexi’s boss Georgia – a fab woman, I want to be her – and Brian.
I love the way Lexi is such a sweetheart, everyone loves her and yet she’s not a spoiled lady, she’s a hard worker, happy with her life even though its not been easy, and that seems to rub off on everyone.
The scenes between her and Roman were perfect, hot and sensual yet not OTT, and it showed him in a different light to the cocky, aggressive public side he presented.
It was good to see more of Gray and Ryker and the kids too – they were in an earlier book and I love when we catch up with characters in a series like this.

Its a great read, great love story, solid plots and scenes, and a nice touch of drama towards the end. Being me I’d have liked that to play out a little longer, to be taken a bit further, I love some angst in a story and this could have taken more but its perfect for others just this way and I really enjoyed it as it is.

Stars: Four, a great addition to the series. A little more drama and angst would have been a five but it’s a solid four.