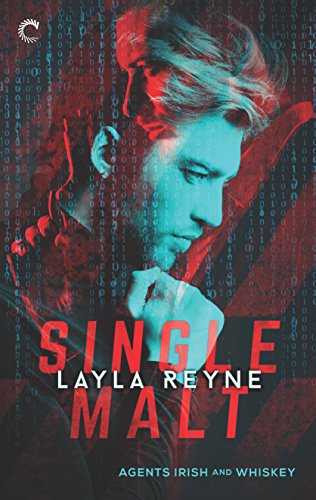 I couldn’t find any other books by Layla, so was hesitant about requesting this – I hate writing reviews where the book/author style and I just don’t gel, so try to choose carefully. The synopsis of this really drew me in though, and I usually enjoy Carina books so I took the plunge…and I really enjoyed this story and look forward to the next two.

Aidan, still grieving after the senseless death of both his husband and his work partner in the same car accident, is moved into a new position at work, with a  new partner to train as a field agent.
Jamie is a tech whizz, former basketball star and 12 years younger than Aiden, yet from the first look there’s that magic sizzle of attraction between them despite Aiden’s grief, that draws the reader in.
Thing is, I want more than just a romance, I want a story that keeps me reading and this book delivered all that and more.

There’s quite a few tech references here and yet they’re written in such a way that non tech people like me can still grasp the importance, what part the knowledge plays to the plots, and that was perfect.
I needed to be able to follow some of the tech trail as it plays such a huge part in how the plots work out, how people are tracked, how the FBI have info on what’s likely to happen. That works for me, I hate this anonymous CI info that often gets used in novels. I reckon with serious crimes the FBI and other agencies need more to go on than some vague tip from someone who may or may not be telling the truth.
Computers can lie – its all in the programming but clever hackers ( hush my mouth, clever IT specialists who wouldn’t dream of illegal hacking…..) can get past that and lay trails of their own. Clever things Computers, and the people using them need to be several steps ahead. Its a skill you either have or haven’t and Jamie definitely has.

I love the personal bits too, the way Jamie has been watching Aiden from the shadows for three years, and now is partnered up to his crush? Attraction? Well, the guy he’s been lusting after anyway.
Then when they’re together there’s more than just that visceral attraction, they like each other, feel like friends, respect each others skills. All things that make a longer term relationship work. Are either of them ready for that though, do they want it? Aiden at least is still struggling with his grief and now feeling attracted to Jamie hits his guilt switch too.

There’s some sex in here, but its very muted, and the adage Less is More really fits. Its perfect for the plot, perfect for the two guys and because so much is build up, when it does come it feels right, rather than in so many where its shirts off, trousers (men wear trousers, not pants….) hit the floor on page six and downhill from there.
I want story first sex second and this book hits that really well, with the sensuality feeling inevitable rather than plugged in for titillation…

The novel has lots of good secondary characters too, Aiden’s brother Danny, who works in the family shipping firm, and his dead partner’s sister who’s also his boss. Then a host of characters at the other part of the investigation where they’re called in to help in a case that makes up the mainstay of this book.

I enjoyed the way the story wrapped together relationships and of course the usual employment unwritten rules against them at work, family dramas and the issues they bring, and a cracking story, complex enough to keep me gripped reading, and yet with enough info to let me follow the tech side without getting lost.
Kept me glued right to the end. And then there’s some surprises come out just when you think its all died down…
And the ending! Its not a cliff-hanger as such but there are some shocking revelations come out that are going to be the core of the next book(s). I can’t wait!

Stars: five, cracking read that has me drooling for more.
ARC supplied for review purposes by Netgalley and Publishers