Stay With Me, Ayobami Adebayo

Stay With Me, Ayobami Adebayo 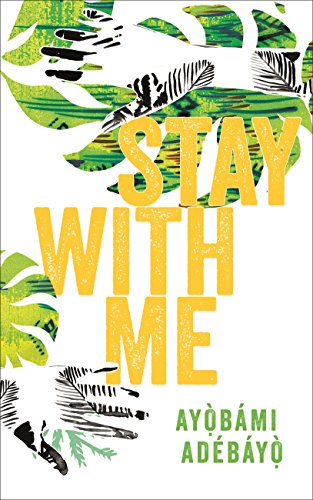 This isn’t a book I’d re-read, that being said it was heart breaking at times. A really sad story where it was difficult to see who was really acting in the wrong.

Yejide was so in love with Akim, having been brought up in a typical Nigerian family where her father had four wives, and respect for parents is huge. Sadly her mother died in childbirth, and there are so many religious superstitions over any event connected with death that she’s always on the outside of the family, always being reminded of the awful thing her mother did in dying. When she meets Akin she’s ripe for love. When he sees her he’s entranced and very soon they are married.

That’s seems fine doesn’t it? Sadly though family is everything in this culture and Yejide is soon inundated with advice from Akim’s and her own family about how to get pregnant.
At first they seem like an independent couple, they know much of this “advice” is spurious superstition but slowly the blame weighs heavily on Yejide.
She’s still shocked though when Akim takes a second wife….my heart broke for her here. I was so angry at Akim and yet in that culture, with the constant pressure of parents, not just two but all his fathers wives who want to see their son or daughter as the favoured, its harder to blame him.
I really didn’t like Funmi, wife number two, and yet if I’m honest she was just doing what their culture taught, marry and have children, seek to ensure your children are in the favoured position of their father.

There’s such sadness here, and I so felt for both of them. Some really strange things too, when with a Western eye and education I’m thinking “oh come on, they wouldn’t do/would have known/ought to have”…and yet events carry on playing out, binding them all deeper and deeper, potentially losing that precious love they had.

Later in the story I really was cross at Yejide and her behaviour, didn’t understand how she could act like that to an innocent child, and yet I also understood her too. My first child was stillborn and I spent hours watching over the three that followed, prodding them awake when I was sure that they weren’t breathing.
Heartbreak, death, despair all does strange things and in a way she was just trying to protect herself.

I could have been angry too at the interfering parents, their intervention caused such tragedy, and yet once more its a culture thing, they weren’t intentionally cruel, just wanted what they’d been taught was best for their children, for their happiness, for their fulfilment.

Its a really sad story, but with an ending that hints at a positive future.
I really enjoyed it, it makes for a terrific debut read but its not one I’d re-read now I know how it plays out. I did like seeing things from both Yejide and Akim’s view points. Gave me a real insight into their feelings.

Stars: Five, a fabulous debut, full of the way a different culture sees parenthood, and the problems it brings when a wife fails to get pregnant.