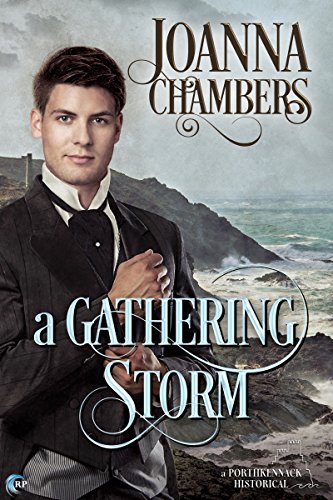 I loved Wake Up Call (Porthkennack 1)  J.L. Merrow, so when I saw there was a second Porthkennack book I wanted to read it. I hadn’t read any of Joanna’s novels before, but Riptide tends to have authors/books that suit my taste and of course I have a weakness for well written m/m historical tales, having found them by way of (for me) the queen of this genre K.J. Charles.
There’s something about the need for secrecy, the huge risks people took in same sex relationships that appeal to the drama side of me. I feel for them, truly, it was an awful time to live, when those caught out lost families, homes, jobs and were imprisoned. Yet as a reading genre I love it. Hypocrite I know 😉

This book brings in all those things, and adds in the touch of Class, Station, the snobbery of how people were so divided according to their backgrounds.

Ward was born to a wealthy family, which left him free to pursue whatever interests he had and more so, relatively immune for the time, of discovery with two very discreet servants who’d become almost family to him, and a home which gave him privacy.
He’s very kind of quiet, introverted though, and I could feel how much Mr Pipp, his mainstay, his servant from childhood, went out of his way to protect him. He almost treated him as a son, and Ward regarded him and his views as many children would a parent. He was lucky in that, with his health issues brought on by childhood illness many in his position were simply ridiculed, scorned, bullied, and his money made him less of a target in public even if he knew the jokes were there behind him.

He’s devastated by his twin’s death, and will, like many grieving people, try anything to contact him once more, and that brings him into his current research.
He’s set everything up but needs volunteers, well, paid ones anyway but after one has an accident some time after assisting him he’s stuck, no-one else will help.

Then Nick comes into his life, reluctantly. Ward is convinced he can help with his research when he learns Nick’s mother was regarded by the locals as a clairvoyant.
Nicks a steward to the Rosscarrock family, a grandson to the current owner of the estate, but illegitimate. His mother was a gypsy, and after she died when Nick was 12 Lord Rosscarrock gave him a job, let him live in a cottage and educated him – after his work was done of course…. so he could become his Steward.
He doesn’t have that same privilege to indulge his inclinations that Ward does, Ward can have an excuse for men that visit, Nick would be hard pressed to explain why someone came to his cottage. Ways of the time 😦 so Nick is stuck with a few hurried risky private-ish publish fumblings.

When something happens that brings him reluctantly to Ward’s assistance they slowly grow closer, grow to respect each other and more, but there is always the barrier of how they met and of course their respective positions.

Its a great story, brings in all the things I love best about this genre, the closeness, the way so much had to be hidden, the risks, and of course like the best stories the characters talk as they would back then, which makes me feel as if I’m really back in time with them.
Its a time too when spiritualism was at a peak, and there were many charlatans, using some clever tricks preying on the need of grieving people. Times were tough then though, and for some it was that or starve. Its easy to be judgmental from a position of security.

Stars: four, a great read, perfectly written to feel set back in time but i did feel the transition between the two kind of slid past the things that had been causing issues a little too conveniently at the end.