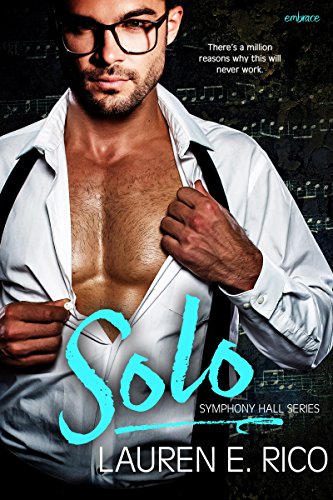 Well, I hesitated over reading this one. I read book one of Lauren’s music trilogy, and though there were parts I loved, such as the music, there were parts I found really hard to get along with, and haven’t yet decided if I’m going to read parts two and three. Eventually I took the plunge with Solo – and I’m So glad I did.

I loved Katherine, such a hard worker, so loyal to her father even when he’s acted so harshly, when she could make her life easier if she did things another way.
She doesn’t though, she’s strongly moral, and just keeps her head down, works hard, and struggles through whatever the personal cost.
I so felt for her all the awful things she had to endure. Drew’s hassling of her, he really picked on her, her advisor Tessa, wasn’t any help, she seemed to dislike Katherine so its no wonder she didn’t go to her for help, the other students were horrible to her.
She’s so alone, friendless, family less and just has learned the only person she can rely on is herself. Isn’t that horrible? When Drew asks her when was the last time someone gave her a present and its years, my heart cracked a bit, such a simple thing, a gift that shows someone cares about you and she’d had nothing from her father, had no freinds with whom she could exchange gifts, just this lonely, solitary life.

Drew, he was a real piece of work the way he singled her out, the way he picked on her for every imagined infraction. I did wonder how he got away with it, and I guess its only because Katherine avoided anything that might throw controversy on her father that she didn’t complain.
Then they get thrown together and he sees a different side to her, sees that he’s projected his anger at Cassie onto her. There are some really emotional moments when the penny drops as to just how awful he’s been to her over the last five years. We see a different side to him too.

Of course as student and professor anything between them is forbidden and they’re risking so much, and they do try to stay on the right side. Still, you know how it is, in the first throes of attraction we tend to think we’re being careful when it reality we’re anything but.

There’s drama here too with the press, in particular one sleazy guy, always sneaking round for a story, trailing her for months, asking everyone about her, trying to find dirt, especially now her father may announce his bid for presidency.
With their actions and they way they don’t see just how much they’re giving away its not long before it all goes wrong.

When it does,  well – boy – is Drew a first class jerk!
I kind of understood where he was coming from, understood that he hadn’t really let go of the past, and I’d guessed who was behind things and why – well, part of the why 😉
I loved the way it wasn’t all hate on one page all love again on the next. I like my drama dragged out, I like to wallow and poor Katherine really hit the depths.

I did find the way they fell headlong into romance despite the risks a little bit, teeny bit difficult to take, both had so much to lose, but I put that to one side as it made such a great read for me.
See, I like some realism in my novels, but this wasn’t too far off course, people do act in stupid ways when in love 😉

Stars:Five, a story I really enjoyed, Lauren’s love of music really comes through and gives a solid, realsitic background to the novel even to someone like me who knows little about orchestras, composing, conducting and the world of Classical music.