Through Your Eyes, Shannyn Schroeder

Through Your Eyes, Shannyn Schroeder 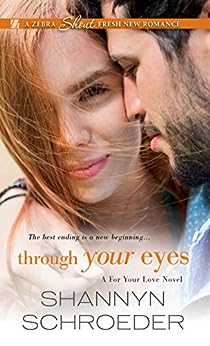 I’d not read any of Shannyn’s novels before so wasn’t sure what to expect.
Sadly in this case it was one of those “its not the book it’s me” situations. I just couldn’t get into the story, didn’t really like the characters.
It’s the third in a connected series, one of those where each book is complete but there’s an overall story arc via the people within it.

I don’t think it would have made much difference if I’d read the first two books. It wasn’t so much that I didn’t understand the setting and situations within it, more than I just didn’t like the settings or characters.
I found they acted IMO like teens, and just didn’t feel like adults. I found the Rory situation difficult to believe, sometimes I wanted to shake Deidre for not seeing what was in front of her ( though top be fair I didn’t get it quite right!!).
Then there was Tommy, he was so polite, so clearly wanting her and happy to do whatever she wanted, and she was just blowing hot and cold on him, and could be so rude in her conversations ( I mean as in uncivil, not nudge-nudge, wink-wink rude…) At times I wanted to say to him, C’mon, Spell it out for her. Stop being her doormat….

Still though, the book is written perfectly, plots play out properly and of course it will be exactly what other readers want, as evidenced by the many fans of the first two books.
Its really is just a subjective choice, I thought I’d like this but didn’t. That doesn’t mean its not a good read for you, just that its not a good read For Me.

Stars: Two, I read first half, skimmed second half as I just couldn’t get into the story.