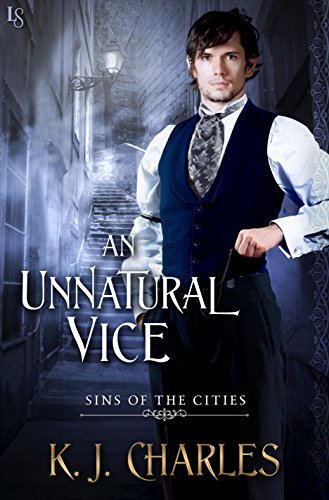 I love KJC’s stories and this is another perfect read. She uses language that fits the time period, and which the kindle look up function proves useful for me when its words I haven’t met before!
I love the English language to be used to the fullest in novels, far too often its kind of dumbed down, almost as if authors feel readers won’t understand their writing. I don’t want a story that’s so literate the plots get lost in flowery overdone prose, but ones that like this give a richness of language to the story really lifts the work.

Its another gentle mystery, very real feeling of the time period, bringing in the feeling of spookiness and damp that the London fogs of the time had.
We meet characters from book one and that was enjoyable, i love it when we see those from earlier books moving on with their stories.
It’s a time when homosexuality was a crime punishable by prison, so these characters have to be very careful in their actions.

Nathaniel and Justin, fiercely on opposing sides, Nathaniel is determined to expose Justin as a fraud, and Justin sees in him all the things he hates, rich privileged upbringing, a person who’s quick to judge, condemn, look down on others less fortunate than themselves.
Neither are quite correct, but its such fun seeing how KJC is going to move them from that adversarial point to lovers. It creeps in carefully, sliding unseen into each others psyche almost the way the London Fog creeps into corners clouding vision.

The description of the seances and how Justin ran them was fascinating, and considering the time and limitations of things that could be used its really believable. I can see how he got the tag of Seer of London, he was very accomplished at what he did.
Its easy like Nathaniel to sneer at how he earned a living, but looking at what else he could do its much harder to judge him. He made many people happy, kept himself, Frankie, Emma and Sukey off the streets, warm, fed and clothed so was it really so bad, did he really deserve Nathaniel’s condemnation?
Its very easy to look down on others from the high road, not so easy if you spend time in their shoes, or even looking at their actions from their POV.

There’s some real danger for them here, the story from book one continues, the murders rack up once more, bringing Justin and Nathaniel into genuine peril, fearing for their lives. And by now they fear as much for each others lives as for their own. It leads them further into the romance, reveals parts of each other so far hidden, and its the perfect story for escape from real time issues for a while.

I loved this book, and like other series from KJC its going into my keeper files for rereading when series is complete. The Magpie/Jackdaw series of hers has been read again a couple of times, and I find things I missed first time round when I’m doing a back-to-back read of the novels.

Stars: five, a fabulous dive back into a time when men who liked men had to be incredibly careful, when the police were overstretched and murders abounded, and when Spiritualism was at a peak.