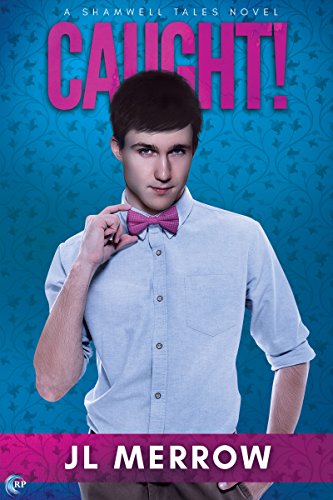 I started this series with the third book, Out! having read others by the same author. I loved it and wanted to read books one and two also, but as happens the TBR list gets ever longer, reviews always take precedence and I just never got to it. And then a couple of days after getting Spun!- the 4th Shamwell book for review, I saw that Caught! – a revamped version, was for review. So finally I’m getting to the start of the story.

One of the things that attracts me to M/M romance is that so often IMO it has an edge over conventional F/M romance, the story is more believable, the tales very often have a subtlety about them that’s lacking in F/M stories.
The language too, I don’t know whether is just the authors I favour, whether I’ve just got lucky, but  its very rich, words used to their fullest, not just a word that’s sort of OK for a situation, but ones that are absolutely perfect. Ones that have me using the kindle dictionary function 😉

Robert sounds like mid twenties going on mid sixties at times the way he speaks sometimes, but its something I love to read, the English language used to its fullest. He dresses in a quaint way, bow ties and the right jacket or coat for every occasion. He is unique, you can see how he can be made fun of and yet he’s perfect, its the oddities about him that make him so wonderful, so different from others.
When he’s talking about time its never “about quarter to” but “seventeen minutes to” and he knows exactly how many items of clothes he has. It could make him stuffy and boring but it doesn’t, just makes him so very original.
I love Robert, he’s a real sweet guy, a natural worrier, over thinker and still reeling from the ripples that spun out after his last job issues. It was a real disaster for him, and when the tale was finally revealed I so felt for him. Some people would just shake it off, but Robert being the man he is it had a huge impact on him.
Anyway he’s teaching primary school kids in Shamwell now, a far cry from the privileged teens he used to teach, in a typical village school where the kids know everything about everyone…or think they do. Some are cute and innocent ( Charlie 😉 a lovely kid) and some very knowing (Desiree). And then there’s the twins, or rather the twins uncle Sean.
He lives with them, helping his sister bring them up, and its a tough time, they’re adorable but real tearaways, full of energy and looking for mischief. Their mum is currently undergoing treatment for cancer, dad isn’t around so Robert sees a lot of Sean at the end of the school day when he’s picking them up.

Sean is gorgeous, has that kind of bad boy edge, but underneath he’s nothing like one, enjoying films, books and good food, and he and Robert find they have so much in common.
He’s Bi though, and poor Robert spends much time agonising over whether he’s actually attracted by him, or being friendly with him so he can chat up Rose, another teacher Robert is friends with.
Their first dates are a series of semi disasters, dates but non-dates, though slowly they get together and then things explode, the attraction between them leaps off the page.

So many wonderful characters here besides Robert and Sean, the twins and their mum Debbie, some of the other mums and dads ( poor Charlie’s dad, having That Chat with Robert was wonderful), Rose who was such a great friend to Robert, knowing just when he needed a push, Hanne his elderly next door neighbour, and Roberts family, mum, stepdad and stepsisters. Titty, oh that made me snigger, perfect nickname for such a rude person.
The story too is terrific, not just a romance but a mix of subtle humour, wry looks at small town life – been there done that – and situations that are so real I could visualise them taking place.
There’s sensuality of course, but behind that, backing up their romance there’s a wonderful, solid tale that unfolds to make for a novel I know will join the keepers for re-reading.
Its got that same fabulous humour as the other book I read, kind of wry and sardonic, never nasty but at times very, very true to life, especially the parodies of some of the characters. They feel so real I can “see” them, know what sort of reaction they’re likely to have to events and its been a real treat to read.

I did miss the fabulous Barry and the Spartans from book three, I’m not sure if that’s their debut or if they appear in book two. Sometime I’ll hopefully find out!
And I really didn’t mean to bang on so much, but this series is so perfect, I love it.

Stars: five, a wonderful, rich read, full of humour, pathos, drama and happy ever after. I love it.