A Most Unlikely Duke,  (Diamonds in the Rough 1), Sophie Barnes

A Most Unlikely Duke,  (Diamonds in the Rough 1), Sophie Barnes 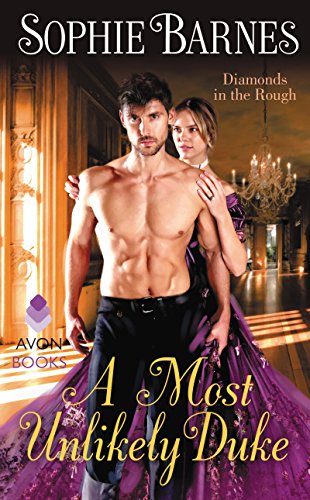 I don’t read much historical romance, but every now and then I have a hankering for that strange past world where lineage rules, and there’s a very defined line for who is acceptable and who isn’t…

It’s a kind of mentally relaxing read, when what hat to wear is a subject for serious decision, a sort of letting go of real issues and delving into a world where for many its a life filled with frivolities.
Of course I’d want to be born on the frivolous side, not the scullery maid getting up at 5am to light fires etc, though that probably would more likely be me 😉

So we meet Raphe and his sisters, abandoned by their parents after debtors prison loomed, and he’s looked after them since. He was only 12 so its been hard, and he’s done some tough things.
The last few years he’s made a name from bare knuckle fighting, certainly not a gentleman’s sport….
Then suddenly in a swift change of fortune he’s the Duke of Huntley, and his sisters are Ladies….

So that was fun, seeing how they could assimilate into Society. They did have that childhood history which helped with the credulity. Rather than the Pygmalion aspect of completely learning from scratch it was more a reminding of what they had learned years ago.
They need to keep the last few years secret though, with a society that is horrified by any taint of scandal. throw in the Lady next door, about to become engaged to another but who Raphe becomes seriously attracted to, and we can see disaster looking.

I really liked Raphe and his sisters, and of course girl next door Gabriella.
She’s a real sweetheart, always been left to herself and her amusements ( insect collecting – though she seems to keep them alive rather than pin them to a board as was more usual back then).
With her sister’s scandalous breaking of her engagement and marrying another Gabriella has to step up, make a good marriage and push the scandal of her sisters behaviour firmly in the past. There’s no room for her to be with the potentialy scandalous person next door…

There were some fun moments here, some great characters, including Raphe’s staff who were such a help to him.
In reality some of the staff in these houses were the worst of snobs, but he’s hit lucky and they take him under their wing!
I wasn’t totally convinced of Gabriella’s parents reactions towards the end given how they started but its reasonable.

Its a sweet story, very light and fluffy, nothing to get too mentally taxed by and sometimes that’s just what I’m looking for. After a few deep, dark reads, some fantasy dramas and murders I just want a pleasant easy read in a bygone world.
This book did all that. Its not one I’d reread, not would this genre be my mainstay by for a one off gentle escape from other books, into a gentile world its perfect.

Stars: 4. a fun, gentle escape into a bygone era.

ARC supplied for review purposes by Author and Publishers