Killing June, A Dark Romance, (Saved by Sin 1), May B. Bridges

Killing June, A Dark Romance, (Saved by Sin 1), May B. Bridges 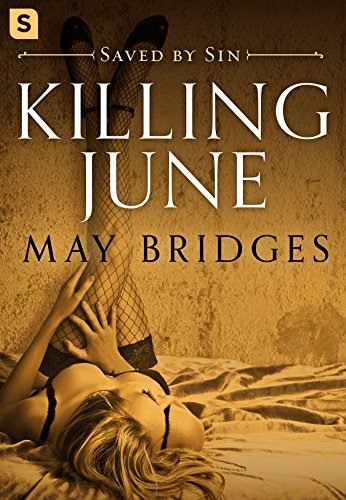 Alex is a very successful business woman, has two parents that adore her, traditional southern church going types, and she thinks if they knew about June they’d be ashamed of her. So she keeps that part of her life very separate, and presents a different front to them, a career woman doing well, who only has time to pop back home to visit and attend church with them every few weeks…

In her alternate life she plays the part of June, her own creation, a woman who dominates men for money, all arranged by her old school friend and former lover Rob.
He’s an odd guy and a bit of me felt sorry for him when Alex is talking about their childhood. It doesn’t excuse the man he’s become though, a dangerous criminal, with some strange delusions about Alex and what she needs. He’s helping her track down someone from her past, as well as arranging clients for June.
They have a strange relationship, she seems to think of him as the sad, gentle boy she knew, not the vicious drug lord, moneylender he is now.

She’s busy with one of her clients when Cade and two other men burst in. That’s a part that I’m uncomfortable about. She sees first hand how Cade works, how he’s a hired mobster, happy to dish out physical violence.
When he’s with Alex we see another side to him, and I really liked that man but he’s also the man that is part of the underworld, works for Rob, doing whatever he needs to keep people in control.
Its why I usually stay away from MC or Mafia style romances, I have issues accepting that level of violence as OK, that men can dish it out, beat up, blackmail people, commit murder,s  and still be a romantic lead.

I really enjoyed the psychology of this though, seeing just why Alex craved the pain, seeing how it let her mind free from the guilt she carries, even though it wasn’t her fault. It was interesting the way she created June, thinking of her as a separate person with differing needs, and yet the past interacts with June too, dictating how she allows people to respond to her, what she wants/needs them to do.

I liked how Cade took care of Alex, how he tried to understand her, anticipated her needs, tried to keep her safe even when it meant risking Rob’s wrath, knowing just what he is capable of doing to get his own way.
When things went wrong between them I understood his reasons, and sympathised with him, even though I don’t like the violent part of him.
That drama part was perfect for me, played out well, lasted some time, not just over in a couple of pages. That’s just how I like the emotionally sad parts of stories to be.

Stars: Four, a great read, perfect suspense, great balance of sex v story with neither dominating, but I just can’t go five stars and accept that Cade can be a romantic hero, knowing he’s also a violent thug and very likely a killer too.
That’s my issues though, won’t affect others of course so it could be a five star read for you 😉