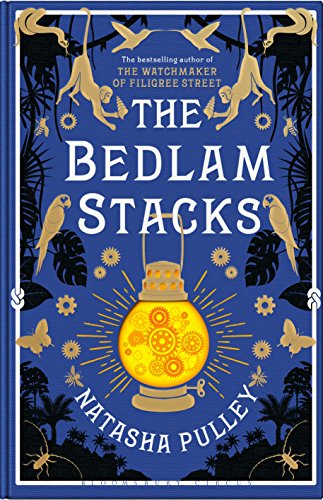 I’m finding this a really hard book to review. Its so very different, very slow paced, very packed with detail, right down to minutiae of some things and yet bigger ones just glossed over. Parts I felt just kept the slow pacing and irritated me, and then I’d read something and want to know more.

I loved the historical feel, felt very real. I was There with Merrick and Co, back in the 1800’s, deep in the magical forests, filled with pollen lamps powered by clocks, pollen forests, whitewood that exploded, was light, filled with honeycomb holes and yet strong enough for the amazing homes they constructed, stories high. And of course later in the novel the fabulous place where the monks live which used so much of it. That was perfect.
There’s the phoenix ducks, the glass formed from ancient eruptions on the mountain, and they way it created a kind of huge greenhouse. Oh there was so much almost whimsical magic here, not spells and sorcery but magic of a different kind.
Then of course the big ones, the Markayuq….such incredible, unusual, fantastical ideas everywhere in this book, which gave it a kind of steampunk whimsy married with very real time in UK/South American history.

I liked Merrick, hated his awful brother, felt so sad that Merrick’s future was dire when he worked so hard, and becameinjured in the course of his work.
I didn’t like Clem, just found him arrogant posing as a friend to use Merrick. I didn’t really know Minna, but she seemed a pleasant lady, and then there’s Raphael….
I kind of wanted there to be more between him and Merrick, could feel something but it was vague and tenuous, slippery as silk, and nothing except a few minute strands at a possible connection slid through the story.
I guess its the romance lover in me, I do so love to find that in a story and missed it.

I enjoyed meeting and knowing the other characters in the village, liked the accepting way they took in Merrick, their confidence in Raphael, their respect for the Markayuqs, the way some recalled his father and grandfather from so long before.

I put it aside a few times, found it too intense one moment and then too slow to continue the next. I know, I know, that’s a real oxymoron, but its how I felt, and how I feel now looking back. I loved it – and then again I didn’t. I felt vaguely unsatisfied at the ending, though it does bring things into a kind of closure I just kept wondering “what happens now?”  I can’t see how it could have ended any other way though that would have made me happy.

Its one of those stories I’m glad I read, where parts will stay with me for ages, engraved into my memory and yet I know its not a story I’d reread.

Stars: Five, a story I’m glad I read, full of fantastical themes but one which I won’t re-read.