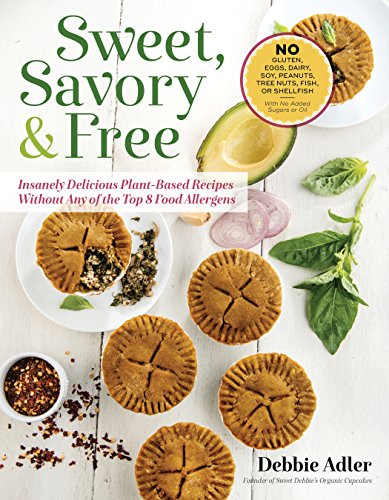 I’ve been lucky in my family, my children have never had allergies that are a serious issue. My daughter was brought up on goat milk as she reacted against cows milk, but she outgrew that by around two years old.
She became a strict vegetarian at nine, so food labeling and ingredients became a normal part of life for us. Its amazing what gets tucked into the most innocent of foods, and we found animal based gelatine crept into so much.
Then her third child was born with multiple allergies, cows milk, goat milk, soya, wheat, eggs, and she was advised to avoid meat and fish at weaning plus all nuts. It meant sticking strictly to label reading again, and I found 20 years on manufacturers still putting in things that to my mind weren’t necessary. Orange ice lollies, the juice kind, we were amazed they have dairy in them. Why? Its not needed.

For anyone in that situation, or indeed anyone concerned about what exactly we’re eating this book is perfect. I doubt it’s for those who claim “intolerance” but eat those foods “on a good day”, they don’t have the determination to change what they eat, just to inconvenience others….
Allergies are serious, life threatening, not a choice issue.

If I was starting my family again I’d use this book as a key element of family nutrition. Its not full of weird recipes and ingredients everyone is unfamiliar with, but favourite ones that Debbie has carefully researched, so they can be reproduced from ingredients that are both healthy and non allergenic.
It does mean changing the whole way of looking at food and ingredients though. I’ve always done what I think of as “clean” eating, making most of out meals from scratch, not buying ready meals. That’s how I was brought up, and it wouldn’t be difficult to change that to this way of eating.
Debbie’s done all the hard work, and though the initial food lists look daunting they’re not and I’m sure it would soon become second nature to use these instead of what we ordinarily have in the cupboard.  It’s a simple matter to swap the usual ordinary flour, sugar, fat etc to one of those she recommends. That way you can still use your old favourite recipes, just make them better for everyone.
Its not all dry nut-roast, lentil burger and meat free loaf stuff either, but recipes that really do sound mouthwatering and attractive.
I remember when Brennan ( the grandchild mentioned above) was one, the challenge to find a recipe for a cake that was egg, dairy,wheat and soya free. Even the hospital swap lists didn’t really deal, advising those with wheat allergies to swap with soya, the same for dairy. If you’re allergic to them all they didn’t have an answer. Fortunately Vegan recipes helped me source a chocolate cake recipe, that was tasty and satisfied the Birthday Cake remit. If we’d had this book though, we could have varied his diet so much more, with food the whole family would enjoy.

If my children were young I’d definitely use this as a daily eating guide and change my pantry ingredients. With the internet its pretty easy to source most foods now, and the ones in here can mostly be found in big supermarkets now anyway. Its just ingredients to hand and mindset that really needs changing, and I’m sure after a few weeks it would become second nature.

For personal preference I think conventional print format is better for recipe books ( in fact most non fic books). It makes browsing and choosing what to cook so much easier I find. As I’ve now eye issues and can’t read them though, I’m thankful of the e-book versions.

Stars: Five, the book to give anyone as a new home gift. Packed with mouth watering healthy recipes.