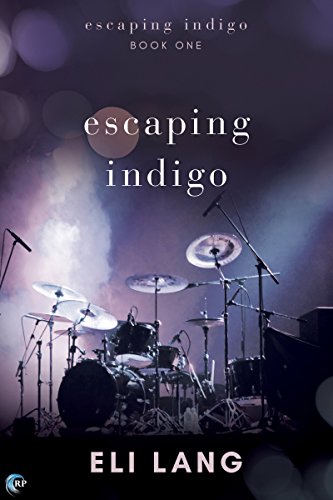 There’s bits I love about this story, the band and music parts, really made me feel I was on tour with the band but…the romance. It was subtle, so subtle it almost disappeared, and for me it didn’t really work.

I liked the guys, but poor Micah, he’s had such a sad past, lost his best friend and still feels as if perhaps he could have done more, seen something, made Eric get help. I think we’re all like that, feel a kind of survivors guilt sometimes and its played on Micah to the point he was really depressed.
Then Eric’s brother gets him the job as a roadie for Escaping Indigo, a band Micah has always admired.

Its a kind of dream world, interacting daily with the band he’s so long admired, looked up to, aspired to be like. Bellamy though is very quiet, and you can feel Micah always worrying he’s in the way, going to cause offence, be in the wrong place at the wrong time. Poor guy doesn’t know what he should do, and then Bellamy starts talking. It’s a dream come true for Micah, and as they chat he begins to know Bellamy the man, not just Bellamy lead singer of the band.
Its odd though, Bellamy himslef and others kind of warn him off, tell him to be carefully, with Bellamy saying he’s no good for him, could hurt him etc one moment, and then worrying Micah is going to be like his ex, the last roadie and leave him.
He’s pushing away at the same time as he’s pulling Micah in and the poor boy is confused.
I so felt for him, he just wants to help, to be a friend and more, part of a couple and its what they do, help each other. Bellamy gets all hurt and offended though at Micah’s suggestions and he’s back to treading on eggshells trying to keep their relationship going without tipping Bellamy over.

At times I wanted to smack Bellamy. Yes he’s got issues, but he needs to decide what he wants to do, not blame everyone for wanting to help. It seems in the past everyone had just accepted he had moments, periods when he was…quiet, different, struggling and they all just worked round it.

Its a sweet romance, and I really wanted things to work out but by the end I still wasn’t sure whether what they were doing would be enough.
Its a very gentle romance, not a torrid sex-every-other-page read and that’s fine by me, I want tenderness, sensuality not just sex and more sex.
Somehow though this book, while being a good read, made me feel part of the scene, didn’t quite cut it for a romance read.

Stars: Three, a gentle read, great band side but for me a slightly unsatisfying ending.