To Win Her Smile, Mackenzie Crowne

To Win Her Smile, Mackenzie Crowne 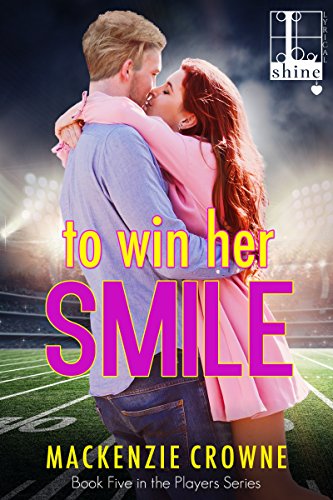 I didn’t realise this was book five in a series, but its one of those where each story is a stand alone, and connected by the characters so I was able to keep up OK 😉

I really enjoyed this read, loved Piper, understood her desire to keep the family estate intact, it sounds a wonderful place and there’s so much family history attached.
Times are tough though, and she’s facing a fierce financial deadline, so when offered the chance to earn enough to clear it she jumps at the chance. Its using her beloved photography skills too, she’s been running the estate as a posh B&B but photography is what really is her preferred way of earning, she loves the magic found in the right picture.

She’s working for Wyatt though, as well as his team, and gets to know the group well. Wyatt makes it clear he’s wants more than just her there as his lucky charm…more than her taking pics for the charity calendar, and soon they’re into a hot and steamy relationship for the five weeks she’s there working.

I loved Wyatt too, talented, a great team mate and player yet his father, just starting a bid for Presidency, doesn’t see how well he does, can’t see he’s doing what he loves, he’s simply irritated that Wyatt hasn’t followed him into politics. He wants him around solely to back up the family image, to boost his own career. He needs squeaky clean family, and as usual his employees are checking into every part of their lives.
Secrets beware! and of course we all have them.

Of course just when everything is going well it isn’t…and in a way that brought the story down for me.
I saw this angle coming way, way off, as soon as something happened right back in the early part of the book, but thought it was so obvious and clunky that maybe the author had thrown it in to distract form the real story line. As we got closer to the end more clues came in, almost spoon feeding us to the event.
I still kept hoping that it would be something else, this was too easy, too simplistic and surely Piper as a professional would have taken measures to ensure it couldn’t happen.
But no…Sigh…I was right 😦 and that brought the story down a star.

I was so angry with Wyatt, but understood his reaction, absolutely loved the way he was made to work for redemption, the way it covered months in the story, not juts one of those sorry, I goofed, effed up and its all happy, happy, happy on the next page.
I do like my characters to have to work hard for forgiveness, love the leads to be feeling really sad, upset, distraught, and Piper was all those.

Its got the perfect ending too. If only that reveal had been less clumsy, less obvious it would have been a full five star read for me.

Stars:Four, a great read, just brought down by a too obvious story line.