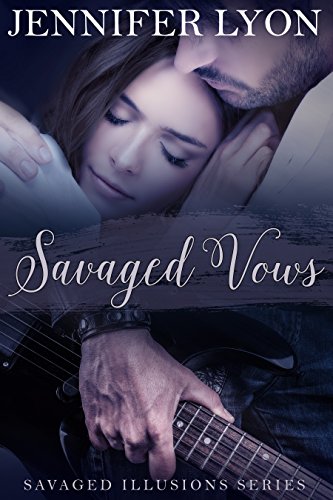 I loved Savaged Dreams, the first part of this trilogy, and have been waiting for this installment. Luckily its not been too long so that was still fresh in my mind, and the final part is out this autumn.

I hate waiting long periods between parts in duets/trilogies, I’ve lost the impetus often, especial when its a year or more….I know I’m not alone in that so a huge thank you to Jennifer for keeping the wait to a reasonable time 😉

Anyway, the book…well, another winner from me. Lots of Beth/Liza and Justice, and of course the band and their way upwards in the fame search.

Having lost the competition – in part due to the negative publicity around Beth and her past – they’re now pulling things together and moving on, and upwards they hope. Its just one of those things that happen, none of them could have prevented it but understandably the band are feeling a little as though Beth is a bar to their future.

They like her as a person but she is undoubtedly a force that can be used against them, and there’s nothing they can do except for Justice and Beth to separate – and they’ve made it clear that’s not happening.

The dramas move on rapidly in this part, scarcely has the ink dried on their marriage certificate than she’s pregnant.

Wow, their publicity officer really isn’t happy about that, and urges Justice into some moves to prevent it harming the band. Some he does, some he stands out against, but its a compromise at best and he feels he’s not being fair to Beth or the band much of the time.
Some of the measures isolate Beth from the band a bit, but she’s also busy building her career, in a new and exciting job, spending time with her best friends.

She does feel as though they’re drifting though, with Justice being more and more wrapped up in band stuff. She understands but..it hurts, especially given the nightmare of her past that still affects her badly at times.

Justice is stuck between the traditional rock and hard place, does he give up his dream? Will that affect the band badly if he leaves? And will he come to resent Beth? And of course money, they’re all deeply in debt now and only carrying on with the tour can bring them out, and let him give Beth and the baby the lifestyle and protection he wants for them.

He has a really tough time in this book, and there’s the pressure of Noah too, his father who’s struggling with PTSD. Jagged Edge ( or Sin – I can’t quite recall their name..)  and Gene Hayes are still lurking around too, providing danger and dramas.

Its all action and just when you feel that’s it, nothing worse can happen, there it is.

Beth feels betrayed on all fronts and once more there’s a nail biting finish.

Its all very realistic, very genuine issues that could happen and its hard to see what else either of them could have done, or whether that would have made things worse.

Its heartbreaking at times, and I felt so sad for all of them, really difficult choices, just as we have sometimes in real life.