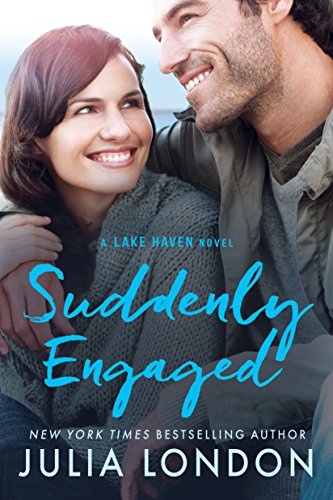 I really enjoyed the first two Lake Haven novels and was eager to read this one. Its another great read, full of emotion and drama but tempered with some fantastic humour from little Ruby.

Kyra, she’s lovely but its hard, there’s only her and Ruby, her dad lives far away and isn’t really close to her, mum died when she was a kid and she’s no other family. Still, she knuckles down and does the best she can for her and Ruby, works hard even if its is only breadline earnings.
Ruby is a wonderful character and gave the novel so much fun. I could picture her red head nodding enthusiastically, her mouth moving at a mile a minute. Who couldn’t love her? Some kids are like that – when mine were small I used to say all kids should come with volume controls. Wouldn’t that be great? Save on the eardrums when all three were arguing, trying to get their voice heard. There was only three years separating eldest and youngest so….

Then there’s Dax, the neighbour in the new house they’ve just moved to. Mr Grumpy as Kyla refers to him.
Poor guy, he’s got a sad past, bad divorce, bad situation and I so felt for him. That must have been so tough emotionally. Ruby wears him down though, slowly bit by bit.
He calls her and Kyra the Coconuts, play on their surname which makes Ruby giggle. she’s such a sweet child, so full of fun, loves his dog Otto, knows no boundaries and has this innocent logic ” but I didn’t go under the fence today mummy, I went around it!” That kind of logic where she does just as she wants, seeming to feel she’s still within mum’s rules.
She was a really great part of the story, the way she slowly wormed herself into Dax’s heart.

It was great seeing Wallace again too, from the furniture shop. He’s a real character, and I enjoyed the way he put the moves on Dax every time he came in to bring his latest works. Its all chat and fun, he has his partner but can’t resist embarrassing Dax.

Who else? Well there’s loads of characters, from Ruby’s father to Furniture shop employee Janice and her friend Heather, who she kept trying to set Dax up with. I felt a little sorry for Heather, Dax really hadn’t led her on, but she was hearing and feeling what she wanted to happen, and not what actually did happen or was said. Sad, but no ones fault. She was a little over enthusiastic, slightly pushy and I think most guys would feel a little taken aback by her attitude, even if they weren’t hoping to be more with someone else…There’s the diner staff, the others who live around the Lake, plus the summer visitors, and of course Ruby’s father and his wife…

When things take a turn for the worse with Ruby’s health I so felt for Kyra. I’m so glad we have the NHS in the UK, and we don’t need to find cash for surgery and doc visits, choose between expensive health plans or food and a roof.
I understood just how scared and desperate Kyra must have felt. I loved Dax for what he offered, but was so cross at him not acknowledging even to himself how he felt until it was almost too late. But it would have cut short the story if he had 😉

The drama keeps on coming with Ruby’s health issues, the financial side, the romance between Dax and Kyra and the involvement finally of Josh – and I so did not like him! Jerk!

Its got the perfect ending, as with the whole story everything is perfectly paced, measured and we have to wait for the right moment, for the time when all falls into place. Its a great read, and one I’ll re-read.

Stars: five, a fabulous story, full of pathos and emotion, perfectly paced and with some terrific humour from Ruby lightening the story.