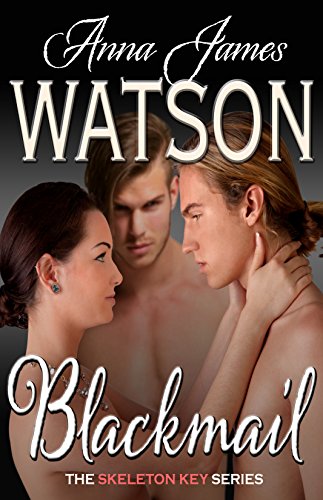 A dip outside my norm, but I was pointed in this direction, and the book is free for KU subscribers. I love KU!
I do like erotica when it has a solid story attached. This was fun and certainly very steamy and sensual! I was a bit surprised to find it continues in further books, though look forward to reading more from the three main characters. Its labelled skeleton Key part 1 but there’s also a series called Skeleton Key, where different authors have written stories that are unconnected except for the title, so I mistakenly thought it was part of that, and not part 1 of a series by this author. My bad…but just in case you have that thought too 😉

I liked – and disliked in the case of Tristan – the characters here. They’re all in their 20’s and studying at school/uni?
As a UK reader sometimes the terminology can be confusing, and I found a few words here that even kindle look up couldn’t help, but context gives me a rough idea. One big issue for me was this Tap thing, its a big part of the story, involving people being selected for secret(ish) groups, and TBH I hadn’t a clue exactly what it was at first, but it became clear as the story went on.
American colleges/schools/universities seem to have a great emphasis on these lifelong clubs, which are often difficult to join. We don’t really do that so much in UK. Same with frat/sorority houses etc.

Anyway, Mia gets caught out, and caught up in some hot and sexy times with Tristan and Julian. The background connecting the trio, the story and the sex scenes is the clubs, and what happens and who can join.
There’s day to day stuff that makes the story feel real, and gives a sense of grounding to the characters, its not just a sex fest but a sexy story and I was disappointed when I came to the end and found…it wasn’t the end ;-0. I’d been watching the % bar waiting for some crisis as usually happens at about 70-80%  and thinking “what’s going on?” and then  realised around that, yep, there’s more to come.
I’m kind of sad as I want to know now whats going to come next, and pleased because it means the story gets longer to evolve, and that way we can really get to know the characters well.
Already I can see that Tristan is so much more than the jerk I first thought, but don’t yet know why he acts that way. I like Julian, he’s very self assured and composed, and Mia is learning a lot about herself. I think this has got the potential to develop into quite a complex series ( I hope), something that’s not often found in erotica, a genre that’s dominated IMO by the short’n’hot reads, where the story come last in priority. Its fun to get an erotic series with a solid and interesting, something I’ve not found very often so far, and something I’m looking forward to continuing. M.Q. Barber’s Neighbourly Affection series is one I really enjoy, though thats very BDSM orientated in comparison to this. Who knows how this one will develop though 😉 .
I did feel the story was a little overtaken by the sex, and that’s why its a four for me not a five, but as always sex is what many readers want, and they’re happy for story to come second. Its a very personal thing.

Stars: four, a good intro to a sensual and steamy series.