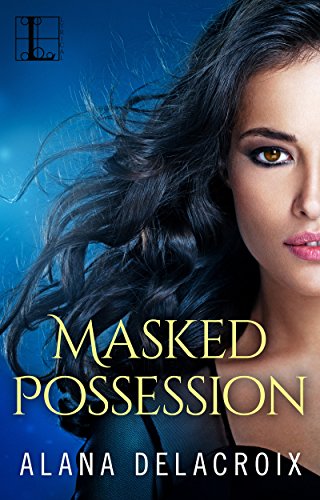 I found this pretty hard going to start, I’d been so intrigued by the “differentness” of the Masquerada but found it very difficult to graps what they actually were/could do. Did they become another person, or were they still “them” inside.
Fortunaly much of the things I struggled with Caro did too and I learned along with her 😉

I really felt for Caro, alone, running and hiding from her past and so scared after what had happened to her. She just trying to lead a quiet life, head down, get on with her life when Eric drops in to it.
She’s attracted to him and he to her right from that first meeting. As she’s told her boss Julian though, never trust a Masquerada, and she’s not about to start. events are against that though, along with Eric who’s determined to get to know this mysterious lady who brings out feelings in him he thought were long gone.

Eric was facing a difficult time too though, a challenge for his position from someone they thought was neutralised. For a clever group they were pretty stupid about that, and the enemy comes at them hard and fast, catching Caro along the way.

Its a fun read, decent amount of drama, though some was a little predictable. Sometimes it seems authors are so keen to enforce a characters position they light up the way with imaginary “bad guy here” signs, “don’t trust this one” etc.
You know, we’ve all read at least one book where instead of working it out from the subtle clues the author has whacked in some really obvious signposts to ones in case we missed it!
It’s not a huge thing but I prefer the less obvious approach, even of it means getting to the end and being totally surprised. I like to then look back and see “ah, here’s where I missed it,” instead of having the plot and characters spoon fed to me.
That’s a small crit though, and it was a fun read, once I got to grips with this different group.
There were a few times too when I thought people acted out of character, and that didn’t sit easily with me. Things where I’d be thinking “but why? why not tell/do/explain” about some incident or bit from the past. Secrets are fine, but when everyone is in crisis mode and dangers is lurking everywhere, its not time to decide you don’t want to talk about something or get precious about the past.

I think as the series continues and the world gets more familiar to readers and to the author, the novels will improve. There’s some good bones here and I’m glad I chose this story.

Stars: three and a half. A good intro to a new world.