Before I Knew, The Cabots Book 1, Jamie Beck

Before I Knew, The Cabots Book 1, Jamie Beck 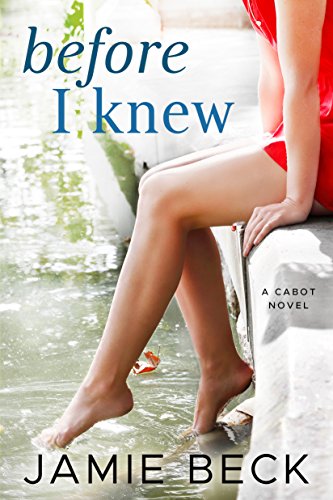 I really liked the sound of this book, and dived in eagerly. I found that though the writing was excellent the story and characters just didn’t keep me captivated, that I kept flicking into other stories putting this aside to finish later.
I did read it all, did enjoy it but its not a magic five re-reader for me.

I liked both Colby and Alec and they worked well together. I felt for both of them for what grief they had suffered, and there’s no time line on grieving – its different for everyone. For both of them their grief was compounded by guilt, by the secrets they both held.
Those secrets always creep out at the worst time don’t they?

I did get irritated about Colby when she still won’t talk about Mark’s issues, still keeps that secret, and yet if she confided in her family, in Alec they would probably understand more her feelings. Instead she kind of martyrs herself over it.
Alec too got me cross at his drama over the food awards. I know they mean a lot to chefs, everyone wants something to aim for in their career. Though I understood how that combined with Joe’s death led him to lose his restaurant, I felt this time round he was very melodramatic about it, too ready to drop everything and everyone in search of that magic praise.
And I guess that bring in my personal bias, critics, whether food, art, theatre or what, who make a career out of judging, often unfairly, and destroying others careers with harsh words just to build their own. Gah! I know they need to be honest, but not deliberately hurtful and negative. The pressure that places on guys like Alec can destroy them and all those around them, and that’s -IMO- just wrong.

So its a pleasant story, a decent romance with lost going on but it didn’t really resonate with me, I didn’t really get to feel Alec and Colby and others were genuine, real people not story characters and that’s why this is a three star good read, not more.

Stars: Three, good simple romance but not a re-reader for me.