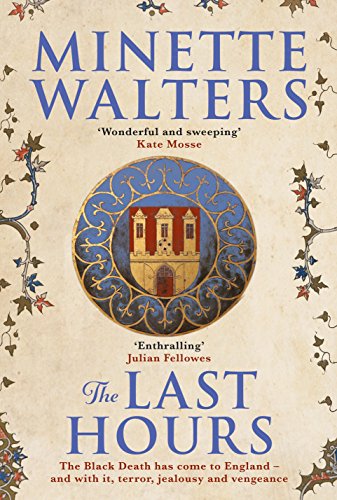 I’ve read a few of Minette’s books, some I loved, some not so much, but i do love a Good historical novel and she writes settings and characters, that whether I enjoyed the story or not, feel so very real.
This one was just perfect, a real escape into the past, at times horribly sad, graphically real, and reminding me of just how unfair life was for the largest section of the population.

I’ve read a few books set in the Era of the Plague, the Black Death, a terrible time that decimated the population.
At that time disease was rife anyway, subject to poor nutrition people succumbed to what would be minor illnesses now, as they had so little resistance . Hygiene was poor too, making it easy for viruses and diseases to spread.

Lady Anne has turned around life on her husband’s estate, with measures such introducing dug out latrines rather than throwing excrement into the moat and urinating wherever they wanted. She introduced practices such as washing too, bodies and clothes, and slowly she introduced education. As they learned the villagers began to understand what she was practising, saw results in less sickness, better health.
Of course all her husband cared about was yields and taxes, and as the population became healthier those increased. Had he bothered to take note of her actions he would have fiercely disapproved and stopped them, but luckily he was typical in that he didn’t take not of how serfs lived, felt they were beneath his notice.

Sir Richard is a sorry reflection of how so many Lords were then (sadly how many would be now if they could get away with it!) Self important, cared for nothing and no-one beyond himself, and felt he was above reproach so long as his pet priest gave him absolution. He was paying him, the guy’s living depended on his goodwill so why wouldn’t he?
Its one of those things that’s always amazed me, that absolution wipes away all sins, leaving the perpetrator free to do them all over again, knowing the priest will remove them. That buying of “indulgences ” too is something that always made me cross.
People were so focused on God, and yet made his words fit the lives they wanted to live rather than vice versa. There have been some real atrocities perpetrated because of, and in the name of God.

Then along came the plague. Was it cast by God onto those who had sinned? For a largely ignorant populace its easier to believe that than to think they have nothing to fight it.

Lady Anne feels differently though, when it comes her husband is away, and she refused him entrance back to the place on his return. She had walled it off and brought the villagers inside the castle grounds to keep everyone safe.
He’s been to a demesne where the Plague is rife, many of the men who went with him are dead, and the few who have returned are ill. She knows if he’s allowed in the plague will spread fast. She asks tells him they have left stores for the men, and after a period without illness they can come in.
I’ve read real life accounts where villages closed themselves off like this, some because they wanted to keep the plague out, some because they wanted to keep the infection contained, knowing it was too late to save themselves, they either were going to get it or survive regardless.

There are some incredible characters here, from the courageous and intelligent Lady Anne, her horrible daughter Eleanor, the sly french steward Hugh, and some of the key characters among the villagers. Thaddeus is one of those, born a bastard, he has managed to stay free by way of some tacit advice from lady Anne. He’s wise enough to keep that quiet, and Sir Richard hasn’t yet noticed he has not sworn allegiance as the others all have to.

I enjoyed reading the day to day life, how they dealt with the threat from outside, managed the food, and later, how they had to decide what to do about the future, how long stores would last, whether it was safe to go outside and search for more, and of course what would happen to a country ravaged by plague, or whether it was just their corner of England that was infected.
Given only the top people ever traveled, with perhaps a steward and a few guards, most had no knowledge of the world outside their village. One five miles away could have easily been five hundred for most of them, they never left the estate of Devilish.

Its a story that shows characters in their true light, who is lazy, who is opportunist, who had the foresight to plan ahead. It also has some pretty graphic cruelty that was sadly so very real. The villagers were regarded as property, disposable to their Lords, they would be beaten and whipped at whim, the young girls subject to abuse and there was nothing they could do.

As the novel continues there are secrets to be revealed that put a different light on some things from the past, and of course affect the possible future.
Its a fabulous read, made me feel i was there with the characters. I liked too Lady Anne’s journal, her dilemma of just how much she could include, whether it would help others in the future if they did all die, or if it would put them in danger if they survived. After all with Sir Richard dead and no sons from their marriage, she was once more a Lady with no power, no say in her life, and likely to be married off elsewhere, with Devilish turned over to someone new.

The only thing I didn’t like was the end, its very, very abrupt, and until I reached the end I hadn’t realised there was another book to come. And not til next autumn….oh, I so hate waiting when I’ve got so engrossed in these peoples lives.

Stars: five,  a very worthy five star read, but i so wish the next book was here now…