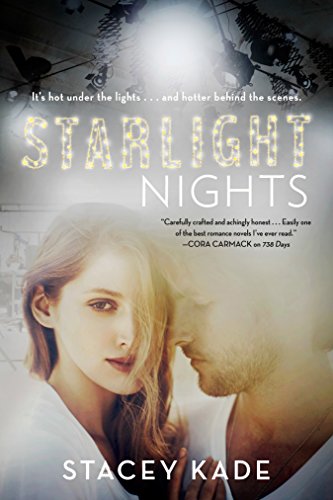 My first Stacey Kade read – and wow – a story that was perfect for me. I’d love to read the first book 738 days, but its not on kindle 😦
You don’t need to read that though to enjoy this one, the books are connected by characters but each stand alone.

I love the rock/film star trope, and poor Callie and Eric (and Chase, who has minor appearances) have a past in the Film world.
Callie has been pushed by her mother from a very young age into performing, she’s essentially the family cash cow, until everything went wrong and her world collapsed. Now she’s at college pursuing a career in accountancy.
Eric was very close to Callie, they starred in the same series and along with Chase from 738 days they were a little unit, almost a family. Until they weren’t.
Now Eric is trying to make his own way, to escape from his acting past, to stand on his own and not be overshadowed by his awful-but-famous producer father.

Callie and Eric both have the most awful parents, Callie’s mother tries to micromanage her career for financial gain, Eric’s father tries everything he can to derail Eric’s career. No wonder they’re such confused people.

Callie’s finding it hard to escape her past, making friends isn’t easy, she can’t seem to escape the jealousy others have, even though they have no idea how her life was, that she’s not some rich ex-star playing at college.
I really like Callie, she made some awful mistakes but her heart is good, she loved Eric, was close to Chase, adores and is so protective of her younger sisters, even worries about her mum and stepdad.
Its the way her mum is now pushing them, controlling every facet of their lives that has her taking part in Eric’s latest film, a web based series set around what was her favourite novel. She doesn’t want to go back to acting, but wants to save her sister from the pressure their mother will use to push her if Callie doesn’t go back to restart the money flow.
Eric, well, he’s one confused guy. I liked him, could see that he had strong feelings for Callie even though he just wouldn’t admit them to himself.
And then a good way into the book we learn more about the events of the night that separated the three and it was heartbreaking, gutting, really made me feel the emotions…..

Its the perfect read for me though was a little slow to get going. that’s my only real criticism, that its a magical tale but took a while for me to get to know and feel for the characters.
It’s got great characters, a terrific story with some people I can really get behind to dislike. I need those unpleasant characters as a foil for the ones I love, else for me the story becomes just too sweet, too sickly. I want angst too and got it, in spades, perfectly balanced with highs, to stop the story being a misery-fest 😉 I demand a lot from stories…
The final tick box for me is the HEA – or at least a solid happy for now,and here’s its perfect, a great epilogue that shows us a glimpse of the future for the trio.

Stars: five, a story I loved and will definitely re-read.