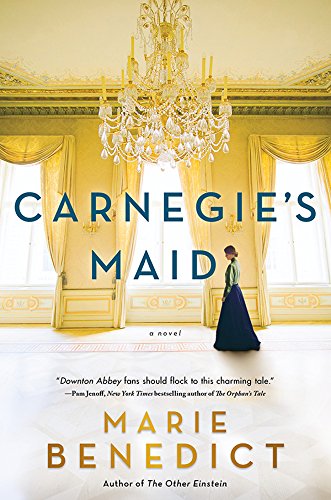 I like to read historical novels from time to time, usually with a romantic theme but not always. I saw this and it appealed, Marie has written a fictional account of what might have been….and it reads very true.

The 1800’s were a time of great poverty for so many, the divide between have and have not was vast, and whole families died of starvation, cold, illness for which they had little resistance. TBH for many at the top it was just considered part of Nature’s Order, a weeding out of the weakest. That sounds awful doesn’t it, but those who’ve never known poverty have no comprehension of what life is like that way.
Andrew Carnegie though has known poverty, but now as a man of wealth he’s in danger of losing that feeling of empathy, or the desire to help those in need which so motivated him.

I loved Andrew and Clara. She’s fiercely intelligent, and so loyal to her family, putting their needs before here’s always. she’s a rarity, and educated woman and Andrew is fascinated by her grasp of business matters.
Slowly they come to mean more to each other, though the book hold true to the period, there is nothing more than glances, occasional fingertip touches, and meetings which skirt, but only just, convention so could be explained away.
I loved the account of how Andrew grew his wealth, loved seeing how “new money” was still looked down upon by certain classes, that attitude still prevails in part here in UK!!
I loved how Andrew had the initial desire for wealth, to ensure his family were always secure but how he became seduced by it, wanting things he formerly scorned. Without Clara – or someone like her – what sort of man would he have become.

The ending is sad, so sad, and I had tears. If only…..but its not classed as a romance, so the ending fits perfectly even if I did want a HEA.
Its a lovely read, slow paced, so tragic in what we see of the families suffering, so difficult to get out of the trap of poverty.

Stars: 4.5, I really did want that HEA but the book is still a moving, interesting read despite that 😉
ARC supplied for review purposes by Netgalley and Publishers