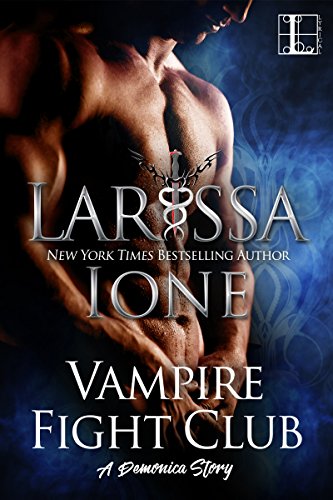 I love Larissa’s writing, but somehow lost track of the series after reading the first few Demonica books. Still, I’d read enough to follow this story, I think possibly if you haven’t read any you could still enjoy it 😉 Its a short, hot paranormal, set in the Demonica world.
Its not a complex story, that’s good as its so short…I don’t often read novellas for that reason, they don’t have space to let me really get to know the worlds and characters in the story, but when its part of an existing series it works for me.

I liked Lena, she’s had a tough upbringing and is now facing death but before that she’s determined to get revenge on whoever killed her brother, the one that understood her, protected her, not the two that have made it their work to torment her. With her loving father dead and now Vaughn gone she’s alone, and for her last weeks she’s going to find the killer.
That brings her in the sphere of Nate, manager of Thirst, and the cruel vicious Demon, Fade….and maybe death too soon. Of course Larissa throws in events that change what’s going to happen very rapidly, and of course there’s sex…lots of it, hot and sensual.

It’s a series that features sex demons as main characters, so its no surprise the main books have that angle, but even this short does -however it fits the general story line, and is not the more-sex-than-story issue I so hate. There needs to be a balance, and Larissa always seems to find it 😉

Stars: four, a fun addition to the series.