The City of Brass,  S. A. Chakraborty

The City of Brass,  S. A. Chakraborty 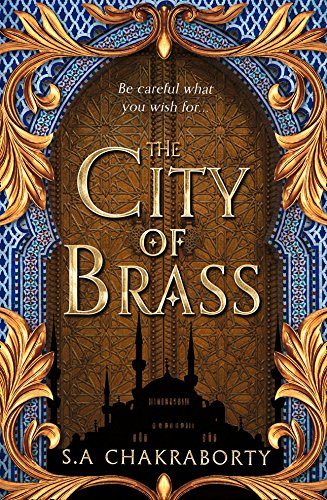 I was so excited to get this book, I’d read the amazon sample and it seemed a fun and unusual read. Thankfully there’s a glossary included because its full of new and curious people and creatures.
I loved the world the author has created, I could feel the heat, the hustle and bustle and that was really well done. I liked the different beings too, felt very magical, almost reminded me of the old Sinbad et al films my kids used to love.
I started off liking Nahri, but as the story grew she seemed to lose that spark of independence, that charisma that drew me to her, and by the second half just seemed a whiny girl. I loved Dara, honest in as far as a Daeva is honest, like so many of their type they often circumvent the truth and talk in riddles almost. It’s clear he doesn’t like Nahri, and they scratch up against one another, both full of distrust. Nahri has no choice though, you can’t go home as they say, so she has to go forward with him. She also wants to know more about her past, and hopefully a better future. When we first meet him Dara seems jaded, tired of his life, of all the things he’s done, many of which weigh heavily on him. He seems to view taking Nahri as a chore almost, something he has to do but doesn’t want to. Then we meet Ali, second son of the king. I wanted to like him but though he seemed to have a good heart he was very naive for his position and I didn’t see him as being a strong character when it was needed, in contrast to Dara who would do what was needed without hesitation. Ali didn’t like the way things were run, could have stopped up, could have tried to right things but seemed too apathetic really, content to fund small changes and quiet his conscience that way.
The story though seemed to meander, little interludes of drama breaking it, but I never really understood the point, didn’t see where it was going, what was the aim. It just seemed to drift, Dara, Nehru and Ali seemed to react only to events, never had any real plans, were never working towards a purpose, it felt like they were just drifting towards the city, fighting through minor mishaps and skirmishes but no actual plan other than to get there. I couldn’t help feeling “and then what will they do?”
Then the ending – and to be fair I skim read from about 40% as I was bored but wanted to see how it ended. I hate it when that happens, when someone major is lost, and I just have the horrible feeling that its going to be one of those rabbit out of the hat successes, where that character isn’t lost, returns despite all appearances, and I just don’t like that. (Think Dallas in the early 1980’s for those of you old enough to remember!) I didn’t want them to go, but hate that kind of comeback. I’m sort of talking in riddles here, but trying not to give anything away as of course there are many readers for whom this is the perfect novel. Sadly I’m not one of them. With a few changes I could have loved this, more direction and planning, some shaping of key characters, it’s so full of potential, such a unique and fascinating world, but as it is is a series I’ll pass.

Stars: Two and a half. So much I could have loved, but the story itself let it down.