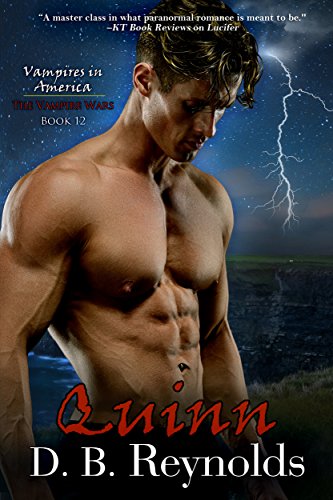 Oh Gosh, I’ve been so looking forward to seeing more of Quinn but this book wasn’t the greatest for me.
I’ve loved all the books except Sophia, and this had the same kind feeling about it for me. I just didn’t feel the connection, the sizzle, the must-be-with each other that I’m used to in DB’s vampire mates.

The story was fun, and as usual I enjoyed the flashbacks to Quinn’s ( and Garrick’s) Turning. What a b itch their Mistress was. I’ve seen technical inaccuracies pointed out since reading this, but TBH I didn’t notice them at the time. Its a bit of a basic error though, I know in fantasy the chance to re-write history is there and Maybe in Quinn’s sixties technology had got that far, but without explanation of that then I can see how some readers are irritated. I guess I got too hung up on the story to notice. I really enjoyed reading Quinn and Garrick’s backstory.

I like that the main plot has now moved to Europe, that’s been set up since the early books, and each later story has been working towards this. Take the battle to the Europeans, rather than wait for attack, has been the recent decision by the American vamps. After all why should they wait, knowing that Europe has designs on their land. Put in some strong Lords and they’re all better off.

I’m pleased Quinn has roots in Ireland, I didn’t – and don’t – want a US Vamps are the only ones strong enough thread to this story line. I’m hoping DB sticks with keeping those roots connected, and also that at least some of the European vamps stay as Lords. I don’t want a total US annihilation.

That’s all for the future though, back to this story. There’s bits I loved, as usual the battle scenes were slick, polished and very real, bloody at times as befits Vampires. I loved Quinn and Garrick, though did find it a bit incredible that Quinn was so fixated on Eve at times, while at others he was very take it or leave it and the-battle-comes-first ( as it should, he’s Lord for a reason)
I have to say it, but I didn’t like Eve. She’s a bigot, selfish, cold in the way she regards Vampires. As Quinn says, if her brother was killed by humans would she go all out killing them? I do find it a bit incredible she’s been so successful, given she hasn’t any special talents, isn’t superfit, gun trained etc but simply relies on her femininity and surprise ( Hey guys, look, Boobs…oh and here’s my pointy stick!) That’s not enough to kill stronger vampires, as we see in the story, and it seems weird that she’s managed to avoid meeting and trying to kill any of them when she doesn’t know how to tell strength. I did feel for her about her mother, she was a horrible woman, and of course losing her brother like that, seeing him killed, was tough. Still didn’t mean I liked her though.

Same goes for her romance with Quinn. With every other one I’ve been able to feel a strong attraction, feel the pull to each other from early on, and felt that human and vampire both respect each other. Not so here, there’s lust, but that’s it. There’s certainly no respect for each other, and in a way everything takes place over such a short time – couple of weeks I think – that perhaps there isn’t time for them to develop that. Apart from sex they spend very little time together, and yet they become Mates….I wasn’t feeling it. I respect all the other Mates, they all have different qualities, but there’s that indefinable Something about them that works. Maybe it’ll grow here, as I’m not feeling it yet.

Stars:Four. I enjoyed it as part of the wider story, loved the Vampire side of things but felt it was let down, rather than enhanced, by the romance. I’m currently re-reading this series- I love catching up with it on a second or more read, the only other one I don’t love is Sophia, and I skim read that to get gist of story, I guess I’ll do the same here.