The Rise and Fall of Becky Sharp, Sarra Manning

The Rise and Fall of Becky Sharp, Sarra Manning 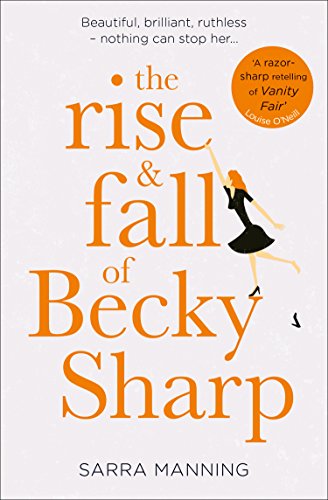 I hadn’t read Vanity Fair, but I’m a sucker for romance and this sounded a fun read – plus I’ve loved some of Sarra’s past stories.
I’d not class it as romance though…there is some romance via secondary characters but that’s just a tiny fraction of the story, and for me sitting it in the romance genre was wrong, and I was disappointed at that part of the story.

I struggled at first, maybe if I’d read Vanity Fair I’d have found the start easier. I almost gave up at one point, the characters all seemed irredeemably dislike-able, but persevered and once into the story found myself hooked on Becky’s actions.
Was she right in what she did? Was she fair? Was she treated fairly by others? So many questions this book threw up and its easy to judge Becky as amoral and avaricious, but with a past that gave her nothing was she just making her way in the world as best she knew? Would be have felt better about her if she accepted her lot and lived on the street begging? Pretty much sure that’s a No from what gets said in current news. Or maybe if she took a zero hours contract and lived day to day on min wage sharing a room with someone else. Why should she just accept that as the best she can hope for though?
Some of the other characters didn’t act any better but their actions – as happens so often in the real world – get excused under work pressures, family issues, social obligations etc. Its only accident of birth that placed George, Amelia, Dobbin etc where they were and not where Becky was in life.

I didn’t like Becky but in way by the end I did admire her. She was tough, grabbed life’s opportunities when they came and worked the to her best advantage. Its would be easy to say she took advantage of others and yet weren’t they doing that to her? Did Amelia and her family treat Becky fairly? What about the Pitts? What about George’s actions, the way he treated Amelia? I think the only person I liked was Dobbin…and Amelia by the end. The section with the news magnate had me thinking “News of the World anyone? Murdoch and the scandals there…”

Its easy to sit in judgment if you’ve never known homelessness, never gone hungry, never had to shop in jumble sales and charity shops. I have. Would I act like Becky if the chance arose? I’d really, really like to think my moral compass points in a different direction but until it happens who knows what we’d do.
Marie Antoinette’s apocryphal “quote” of “Let them eat cake” when told the peasants had no bread sums up so many governing figures attitude to those in need now. They genuinely have no idea of the issues facing so many people, and yet sit in positions making judgments that affect the lives of those people.

Stars: Four, a slow start for me, that may have been better had I read VF, an annoyance that its not what I’d call romance, but a story that was a fun read.