I’m reviewing one book from this series, Alyssa Richard’s Chasing Secrets. Anthologies are a terrific way to try out new-to- you authors for a small price, 21 stories here for under four quid. 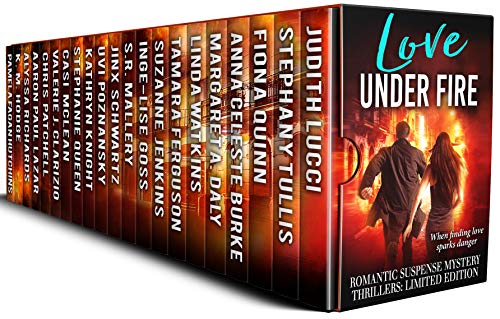 I’ve loved Alyssa’s other stories but this one didn’t seem to work well for me. Its well written as usual, its one of those “just not the right fit” times, not that there’s anything wrong with the story. It could be personal circumstances, I’m a bit stressed, having sold my house and the one I’m buying has been delayed, so I’m staying with daughter, living in her conservatory, and its not best place for getting lost in a story.

Anyway, Barbara has an unusual gift – she’s able to “read” people from their name, doesn’t need to meet them, just needs their first name. She can tell one Steven from another, doesn’t need any extra info but is able to tap into the right person.
She’s married to David, who adores her, and they’re expecting their first child. David’s been a little stressed though, and suddenly he’s gone, murdered in front of her. In the resulting chaos she miscarries, and its taken her time to try to move forward.
She’s beginning to make a new life, albeit very staid, when the past rushes up to her with David’s killers attacking her, demanding she return stolen diamonds. She knows nothing about them, but they aren’t convinced and it becomes dangerous for her and her family.
Hiding out from them she meets Griffin, an archaeologist, and there’s a spark between them they can’t ignore. As always though romance comes with problems and Griffin is due to start an new search through history far away from Barbara.

Barbara’s gift was interesting and Griffin’s project and reasons for moving to Greece very real. Its the kind of thing that happens in real life, couples meet but one is about to move, and its a question of move and abandon possible relationship or try long distance one, or stay and possibly regret lost opportunities. Hard choice either way.
There were some excellent characters in the book, and a very real plot but….overall its wasn’t a story I was gripped by. I’d guessed early on one big “secret”, and the way the killers tracked her seemed like something I’d have expected police to check. There were clues that seemed so unfathomable, and yet Barbara and Griffin found the meanings behind them so easily. Then there’s the way they were able to just walk up to someone’s home, and chip a brick out of the front in their search! They were spotted and had to run, but who does that, damages a strangers home in broad daylight? I’d have expected them to come prepared at night, when unlikely to be seen.
I just felt the problems were tough, but the way they found solutions just too slick, too easy.