A Shadow Beyond, Emma-Nicole Lewis

A Shadow Beyond, Emma-Nicole Lewis 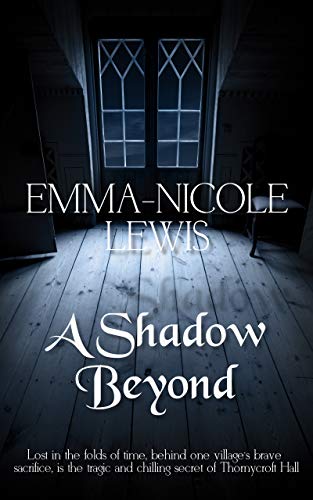 I don’t read books like this often, but sometimes I want to just dip into a different genre, refresh my reading tastes, and this is in the mould of Susanna Kearsley, Barbara Erskine with its past and present, characters linked by history format. Its a lovely long read too, not one of those 150 pages where story is so crammed plots don’t have time to develop.
Its not one I couldn’t put aside, and in fact I did read it over three or four sessions, reading other stuff in between. Sometimes a story just can’t be put down, other times I like to stop and mull over what I’ve read.
I recall reading about a village that closed itself off during the plague, to stop the spread, there are any number who stayed closed to keep plague out, but few who did it, sacrificed themselves to keep plague contained. That takes a really strong group. They were very devout religious folk though, and believing this edict came from God helped, convinced them they were doing what god wanted. Of course the cynic in me notes the wealthy families decamped at first sign of plague, as always it was the common folk who made the sacrifice.
Still, cynicism apart, it was an incredible sacrifice, and one that bears remembrance.

I loved reading about the historical characters, how they lived, the connections between families, and of course just what was haunting Thornycroft. The suspense is very deftly written and it seemed to me most times we jumped from past to present or present to past each new chapter started where old one left off, so Rachel would be scared by something back in the past and at the crucial moment the book would jump forward and we’d see Kate discovering what has scared her. It gave a great feeling of continuity to the story.
I loved characters, past and present, didn’t see the twist in present times, though I’d guessed some of the past twist, and whichever time I was reading I became totally absorbed in what was happening. I have a small criticism in that though the book was deliciously long I felt the ending was rushed, crammed in too small a space, and it didn’t really bring out the incredible connections of past and present. I kind of felt I was looking at % bar and thinking “ so when will we? Will she tell us ?” and it all kind of fell into one complete few pages, or at least it appeared that way while reading.
There is romance here, both past and present but its very muted, very much a tertiary plot to the main suspense angle.

Stars: Four, I really enjoyed this, but wished there was a less rushed ending. It did all tie up properly, nothing was missed but it felt like each plot came to the crux at the same time and I didn’t feel that did the story justice.