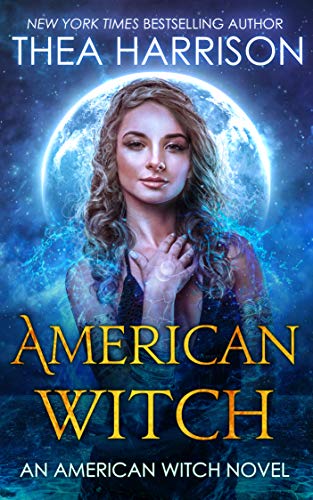 I love Thea’s writing, have read many ( but not all) of the Elder Races series, and I loved the tie in here. Its very subtle, not a direct link, more a reference to the world setting.
I enjoyed the story, had me hooked very quickly and loved Molly and Josiah separately, but I wasn’t so convinced about them as a couple. There was certainly intense lust, but they seemed to flow from that to a full fledged relationship very quickly, and it just didn’t feel right. I felt cheated of the relationship growth, especially as for much of the time they were separated, for Molly’s safety.
The dangers facing Molly were twofold, first externally via her cheating husband and his machinations and secondly from her newly emerged and totally unexpected witch power. I loved Molly as a person, and cheered her on when she announced at the party just what Austin had been doing. He really was a typical selfish cheating husband. I had my thoughts early on about who the other party ( this time) was, and really felt for Molly when she discovered who it was.
Josiah seemed pretty cold, single minded about his quest when we first meet him, and he doesn’t realise Molly is unaware of her Powers. There are some terrific scenes between them, and TBH he was a character I thought I’d dislike. Sometimes its more interesting that way, than having the main leads be wonderful, likable characters right from the start. When I discovered his history, the reasons behind his quest I understood it. Its bring him and those around him into danger though, and I was full of respect for Molly when she said – for specific reasons) that she couldn’t be around that danger, and removed herself temporarily until he’d sorted it, even though it was heartbreaking for both of them. That brings me back to the turnaround in feelings though, where they’ve gone from 0-60, from disliking each other intensely to full on togetherness. It was just too quick, and I felt a bit cheated.
Its an interesting story, with some great characters. I couldn’t recall if it was a standalone or the start of new series as I was reading, but am so pleased it is a series. This book ends completely but leaves lots of threads open for more stories, and I’ll be lining up to read them.

Stars: four, a great start, just a few small reservations that stopped it from being a five.