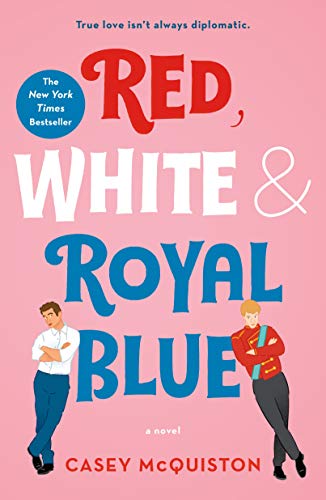 Note: I’m reading an ARC so possibly the issues about UK/USA differences will be corrected before publication. As a UK reader things like this are very noticeable.

The first issue that bothered me came very early, UK Prince Henry’s brother’s wedding cake. We have £ not $ so the cake would be £75,000 not $75,000 ( or whatever the exchange rate equivalent is ). Then there’s Alex’ comments on the beans on toast breakfast. Well, we do eat that, but in a royal palace the fare would be far wider, they’d be pushing the traditional full English, with maybe kippers, smoked haddock etc and a Continental option. Poor Alex wouldn’t have been forced to eat something he so disliked.
Anyway, got that off my chest 😉 now to the book.

I hadn’t realised it was a YA/NA and to start with Alex especially felt even younger than his 21, and that irritated me. You can’t help liking him though, he’s got that irrepressible good nature, except when it comes to Henry…
Of course thrown together as they are, they start to see a different side to each other, and I really enjoyed how they developed a strong friendship before getting into deeper feelings. There’s quite a lot of artistic license given in how they manage to meet surreptitiously so often, in reality a Prince is incredibly closely guarded, and I expect its the same for the President’s son. Still, fiction 🙂 and it makes for a fun story.

I’d jumped in after reading the blurb, but when beginning it I really thought this wouldn’t be one for me with that shaky, YS feel start. I’ve read some YA books and enjoyed them, but YA romance isn’t really my thing. However once I got to know Alex better and see that despite my first impressions he really wasn’t a 21 going on 16 kid, that actually he was more mature I started to enjoy the story.
I don’t know whether its a UK/US thing but I’ve noticed often that characters in the 18-21 age group in US novels tend to be very immature, mentally like a UK 15 – 18 age group, whereas in UK ones at that age they act and are regarded as adults. Maybe its that they are treated that way in UK, and in US adulthood doesn’t seem to clock in till about 24 or 25?

I think what I liked best was getting to know the real characters, the people they were behind the front they show in public. I enjoyed the secondary characters too. They played a solid part in the story, backing up Alex and Henry, providing advice and working hard to keep the romance on track. I was surprised ( pleasantly) at how in depth some of the issues were treated, bringing in topically important plots, ones that affect folk in real life. I love that bit of reality in fiction, and it plays an important part in helping to effect change sometimes by raising issues folk may be unaware of.
There was the whole LBGTQIA issue, especially in a very traditional Royal family, the way it can affect voters in the US system, the issues of others making political capital out of others problems, and of course a very topical issue about sexual abuse in the workplace.

Stars: Four, a book that started badly for me but which had a lot more depth and topicality than I expected. And a great romance of course 😉

Arc via Netgalley and Publishers