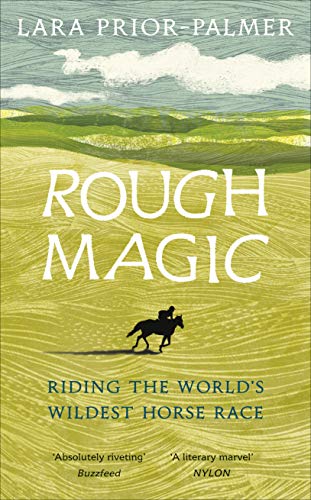 I so wanted to love this book, I’d adore to have taken part in a ride like that. To the astonishment of my totally non horsey family I grew up with an adoration for all things equine as soon as I could walk.
It took me until I was over 30 to have my own horse but there is a real magic between a horse and rider when both are willing, a real feeling of oneness, rightness. This kind of race takes that and pulls it to its furthermost.

Sadly my hopes for the book fell flat. I felt Lara treated it as a bit of a joke really, something to pass the time, and that makes a mockery of all those who trained, who organised, did the hard slog of setting it up.
She enters on a whim, doesn’t train, hasn’t time to train now having entered at the very last minute. Doesn’t have the money but gets the entrance fee halved, drums up some sponsors, and yet still doesn’t treat it with the respect it deserves. She doesn’t take the required jabs, doesn’t pack spare clothes, ignores all the things race advisers suggest taking, gets bored while waiting pre-race for things to set up, so has fun merrily taking all her antibiotics, anti sickness, painkillers etc out of the packets and decanting into a plastic bag. Then takes them ad hoc on the journey hoping for miracles….she tells us proudly several times about this – its why it sticks in my mind. It feels at times as if she’s an adult, playing at being a child pretending to be adult…
She lets go of one of the horses while tacking up, takes off head collar before bridling allowing it to charge off. Then waits for one of the race guys to fetch it, with an air of “oh dear, how did that happen? Never mind” It’s basic stuff for any rider, strange horse, unenclosed area you NEVER let the animal lose, simply looping the collar around the horse neck would have sufficed but no, Lara knows better.
It wasn’t a problem but could have been, these are horses borrowed ( probably for a decentish fee but…) from the locals, who need them for their existence in that harsh place. She’s there a couple of weeks, they live there, need their animals in good health to survive. If the horse damaged itself they can’t simply call up local vet and have it transported to a nice modern surgery for treatment. Its bullet time. The loan of horses needs respect.

I did enjoy the bits about the race, the horses of course, the people that live there, the incredible scenery, but for me Lara herself came over as an indulged child rather than the gutsy young lady I expected.
What others love about the writing style too just didn’t resonate with me, they enjoyed her “verbal acuity” – for me it read more like self indulgent ramblings apropos of nothing. I love to read about people’s history, families, the personal touch but Lara’s came out in such a strange way I felt they were all really strange folk, and I’m sure that’s not what they are or what she intended.

I admire her hugely for doing the race, but found her lack of planning, lack of respect for the race, for the horses, for all the hard work others have done to let her have this week or so of racing really difficult to let go. I just couldn’t get past the fact that it felt as if she treated it all as a bit of a joke really. Others can get past the things that grated on me and adored the book for what it is, a retelling of an amazing race from one of the participants, so you may feel like them and love this novel. I didn’t.
I enjoyed parts of the story, wanted to give her five stars just for taking part, and yet even that achievement gets tarnished for me by her way of treating the whole things so casually.
She’s not sure even as she starts, that she actually wants to win, mulls over what happens if she just gives up on day one…and that non commitment feels like a slap in the face to all those who’ve worked so hard.
I guess its like someone talking their way into a place in the UK Grand National at last minute, getting one of the best horses to ride, but not bothering with training, protective clothing or learning the course route, and then just as race is starting announcing to news media they’re not really sure if they’ll try to win, maybe a fall at the first might be whats best, maybe they’ll just try to finish, or get half way or….See? It denigrates all those who have put in the work to me.
That she finally won feels like good luck more than actually hard work, and that doesn’t feel right in a race of such epic uniqueness.

Stars: Two and a half. Others love it, what I didn’t like they clearly got past, so may you. Each to their own. Its not a bad book, just one that wasn’t for me.