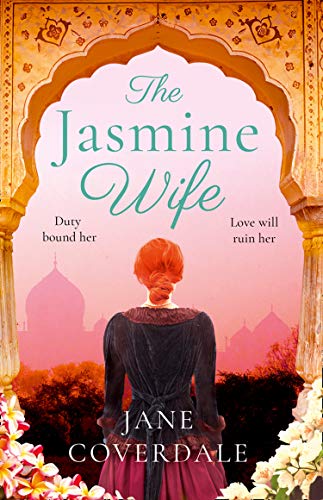 Well, this one doesn’t feature my usual bete noire, the “women’s fiction” category, but that runner just after the title? “Novel for women” – it means much the same and just makes me think, Why? Why alienate a potential swath of readers? Men write romance, men read romance, its time we stopped categorising stories as men/women reads.

Anyway, the story. I love books set in other countries, especially India/China/Japan, and especially set in a period of history where life was so very different not only between sexes but between races.
I loved this book, really made me feel there with Sara, feeling the heat, enjoying the rich aromatics, the colourful landscape, the busy markets and shops.

Its a good story too, what happens to Sara was what sadly happened so often then. Orphaned, brought up by relatives, and encouraged to marry rather than stay with the family. Didn’t really matter whether the match suited her, the fact that someone with a position in India chose her was enough. For those without connections there was the notorious “ fishing fleet” where desperate girls came on spec, hoping someone needed a wife.
Its hardly a romance a marriage like this, more a match of suitability. Perhaps, they don’t really know each other well after all. Sara thinks she loves Charles but barely knows him, and the man she meets in India, after a years absence is very different.
By her background, her childhood in India with very open minded, liberal parents though she sees the locals as people, while the British enclave here now are determined to treat them as lesser, as unfeeling, as beneath any decent treatment. What this books shows is just how it was in reality, and the sheer, breathtaking arrogance of people just because the are British is incredible. Its always amazed me how one tiny, little country became such a world power.
Of course Sara is lovely, way to good for Charles and the British Enclave in Madras. Charles is ambitious, and not above using Sara’s beauty to further his position, and insidiously bullies her into behaving with those who can influence his future. He sees her as a tool more than a wife, but then sadly he’s not alone. Women were regarded that way, possessions to be used, to be paraded out with, to show off, while they kept an Indian woman for what they saw as their baser needs. Wives weren’t allowed or expected to enjoy sex, but remain above such things, while men had “needs”…… Incredible how men who denigrate Indians in public still wanted them kept quietly somewhere for those needs. Sadly that was the norm, accepted even, and the poor ladies, Indian or British, had no say.

Sara gets a rapid eye opening about her husband, and of course the wonderful, attractive Ravi is a temptation she can’t resist. I loved the idea of their meeting being fated, that the signs, the gurus, Sara’s history, all meant it was inevitable according to Ravi. This idea of fate v personal choice always fascinates me, and there are times when things seem impossible but somehow work out, as if fate lent a helping hand.

Stars: Five. A gorgeous read, transporting me to India, desperate for things to work out for Sara, for her to be happy.